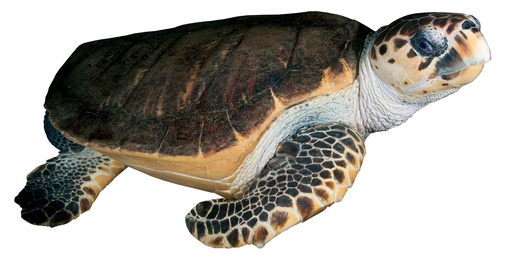 Loggerhead turtles are the most common species of turtle that are recorded as occasional visitors to Tasmania and are usually associated with the seasonal impact of the East Australia Current or the Leeuwin current.

Loggerhead turtles are named for their large head and powerful jaw.

Adults have a reddish brown shell often highlighted with light brown and olive, though this can be hard to see as they are often covered in algae. Their undersides are a contrasting yellow. Carapace is slightly heart-shaped. Hatchlings have a dark brown carapace and light brown or cream coloured plastron (under part of shell).

They are found in coral reefs and in bays and estuaries in all tropical and sub-tropical oceans in the Pacific and Indian oceans around Australia; 0-100 m depth

Turtle distribution and movement patterns are not well know, so please log this species wherever it is spotted in NSW, Victoria, Tasmanian, South Australia and Southern WA waters

Redmap species descriptions were provided by Dr. Christine Fury and where applicable with permission on the following books.