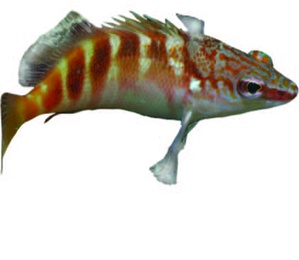 Known from northern New South Wales to the north and north-east of Tasmania (Bicheno). Sightings have been made at Maria Island. This fish is dark brown across its back with a pink middle and light pink underbelly. It also has distinct thin light bands vertically down its body that appear to fade mid way down - and hence its name. Has a white dot on its ear - or operculum.

Redmap species descriptions were based, with permission, from the following books: