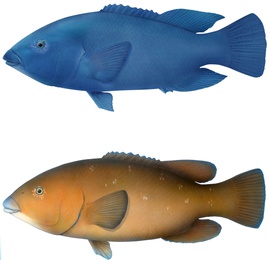 A common and well known New South Wales species found from Harvey Bay to Wilsons Promontory, Victoria. Sightings of Blue Gropers have been made in the Bass Strait and off the east coast of Tasmania.These are the state fish of New South Wales. One male groper heads a larger school and if he is removed the dominant female changes gender and colour and becomes the new replacement male. MALE: Males have fleshy lips and are a blue or blue-green colour. FEMALE: Brown with random light spotting/blotches. JUVENILE: are grey with similar blotches.

Eastern blue groper are generally found on or near exposed reef; 0-40 m depth

Log this species wherever it is spotted in Tasmania or Victoria