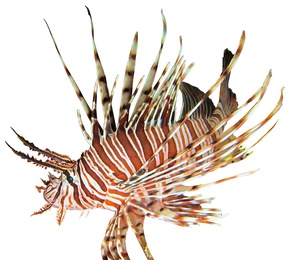 An extremely distinctive fish with very long dorsal and pectoral spines. Bright red all over with whitish 'zebra' stripes and long, broad filamentous pectoral and dorsal fin rays. Spotted tail fin. Length of fin ray filaments and tentacle over eye reduces with age.The spines are venomous and act primarily as a defensive strategy. There are very little known predators of lionfish. The body is red to dark red (almost black) with vertical white stripes that join and continue into the fin rays. The fins are banded in alternating white and red bands. The lower jaw is wide tapering to a narrow top of head. Along the jawline and above the eyes are fleshy protrusions that have a similar banded colouration as the rest of the fish. The tail is transparent with non-venomous banded spines. Juveniles are miniature versions of adults with less banding on the fin rays and spines.