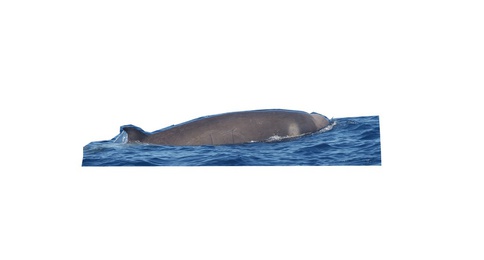 Very little is known about this elusive beaked whale. Shepherd’s beaked whale has only been captured on film a handful of times, including off Portland (west coast Victoria) in 2012 by the Australian Antarctic Division. The first record of a stranding in Victorian waters was also in 2012, with this specimen added to Museum Victoria’s collection.

Shepherd’s beaked whales have a dark brown/grey upper body and a pale underside which extends onto the flank above the pectoral fin and into the tailstock roughly in line with the dorsal fin. They have a distinctive pale rounded head with clear demarcation to a long narrow beak (rostrum), a dark mask-like patch around the eye and in adult males, have two small teeth erupted at the point of the lower jaw. They have small pectoral fins and a relatively small dorsal fin positioned approximately 70% along the body. The dorsal fin is mostly curved in shape but may appear triangular in some individuals. Interestingly, this is the only beaked whale species with a fully functional set of teeth in both the upper and lower jaw.

Interestingly, this is the only beaked whale species with a fully functional set of teeth in both the upper and lower jaw.

Primarily known from a around 25 strandings and 28 live sightings.

Log this species wherever it is spotted in Victorian waters

Contact the Whale and Dolphin Emergency Hotline on 1300 136 017 if you find stranded, entangled, sick or injured whales or dolphins.