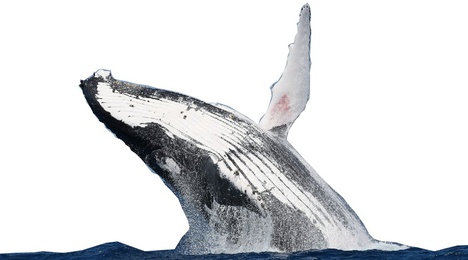 The Humpback whale can be distinguished by its uniquely large flippers which are approximately one third the length of the body. It is dark grey in colour and may have white markings scattered across the body. Its dorsal fin is variable in shape ranging from low and stubby to hook shaped and is usually position atop a raised hump at two thirds the way along the body. Humpback whales also have small 'knobs' on the rostrum known as tubicles which each contain a small hair. Generally speaking, southern hemisphere humpbacks have a white ventral side, while northern hemisphere whales have a darker ventral colouration. Several migratory feeding areas have been identified along the coasts of NSW, VIC and TAS.

Log it if spotted anywhere in Australia - we're helping build a better picture of where and when this species lives and moves!