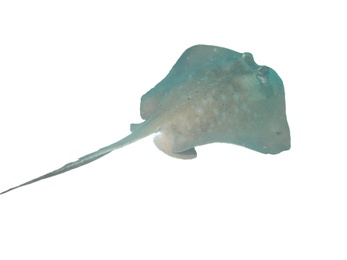 Oval shaped with tail longer than body. Dusky brown-grey in colour on the body. Blue spots adorn the upper body disc and follow no distinct pattern. In some individuals there is dark shading beneath the eyes and on the brow ridge. Tail is grey-white with white banding along the tip. Spines are found on the upper surface around the middle of the tail.

Usually encountered buried in the sand with only the eyes protruding. Easily startled if you come within their immediate vicinity.