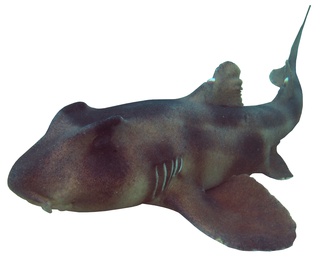 The crested hornshark has a grey body with dark brown spot-like markings. The brow ridges are bony and extend abruptly above the eyes. The gill slits are white and the edges of the fins have a lighter colouration than the body. It is a very unique looking shark and easily distinguishable from other shark species. It does however resemble the closely related and more commonly encountered Port Jackson shark.  The two can be distinguished by the presence of dark coloured, triangular shaped markings on the flanks (behind the head) on the Port Jackson shark.

This shark can usually be found resting on the substrate or foraging for food items such as urchins during twilight and night hours.