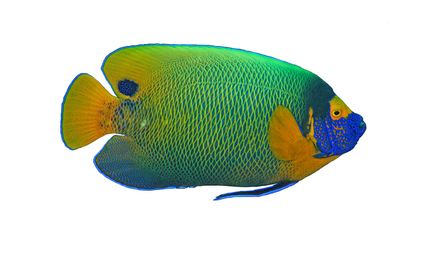 The Blueface Angelfish has a distinctive blue mesh-like mask on its face and cheeks with a yellow band across its eye and a blue spot on the lower rear dorsal fin. Juvenile Blueface Angelfish are very similar in appearance to Pomacanthus sexstriatus (Sixband Angelfish), except with alternating narrow and wide bands.