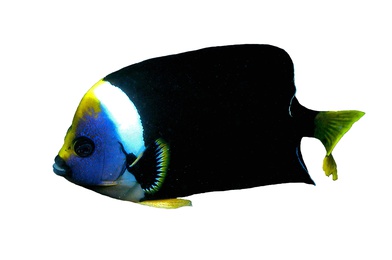 Juveniles have a black body and face with vertical white band running along the gills. A yellow bar is present on the top of the head between the eyes and the throat area has a yellow tinge. Caudal and pelvic fins are yellow with transparent edges. Pectoral fins are transparent.

Adults commonly found in pairs or small aggregations feeding on sponges and tunicates. This fish is often incorrectly identified as Chaetodontoplus personifer, which can be distinguished by the black band on the tail.