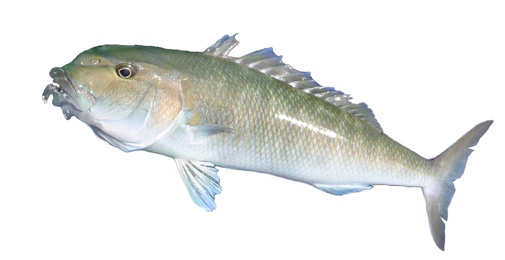 Distinctive elongated head with large pointed canine-like teeth and a slender, cylindrical body. Colour varies from dark green to blue-grey. The underside is generally a lighter shade of green/grey. The tail is deeply forked and has a pale yellow colouration in some individuals. When erect the dorsal fin can have dark spots along the base.

The green jobfish has a cylindrical, torpedo shaped body with distinctive elongated head and large teeth. Scales are large diamond shaped are visible along the body but become smaller and less distinct on the head.

The colour varies but is generally an olive green to bluish-grey. The belly and lower parts of the caudal fin are a lighter shade. The caudal fin is deeply forked and can have a yellow tinge. When up, the dorsal fin may have dark spots along its base.

This species has been known to cause ciguatera (a type of food poisoning).

Log it in NSW if spotted in Solitary Islands and south