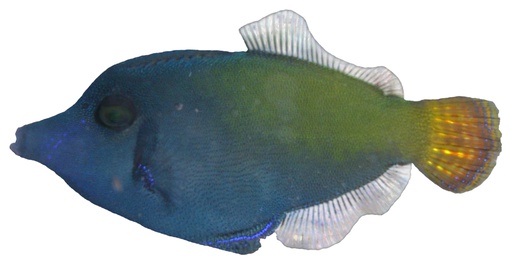 The body can vary in colour, most commonly have a bright blue front fading into a green posterior. Blue frontal area and green rear is common, but light grey, brown and yellow may also be present. An elongated oval-shaped black spot is visible behind the eye. The tail is usually a bright orange or red with light striations and dark banding at the trailing edge. The skin is rough due to tiny scales with a raised, spike-like surface. The first dorsal fin has been altered to form a large spine. Pelvic fin is small. Mouth area is pointed with small lips.

Commonly amongst rocks in lagoons and shallow reefs; 0-20 m depth

In New South Wales, log this species if spotted south of Bate Bay