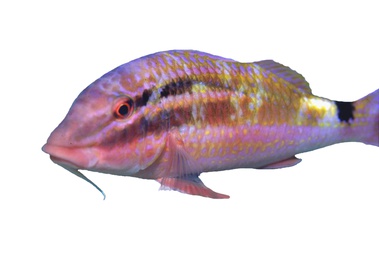 The distinguishing feature on this goatfish species is the large black mark on the upper surface just before the tail. In front of this black mark is a white or light yellow marking. The body is red to brown above and a lighter shade below. Light and dark bands run horizontally along the body. Distinctive barbels under chin (which are a lighter shade of the body colour). Juveniles form small schools with other species. Adults are usually found in pairs or on their own.