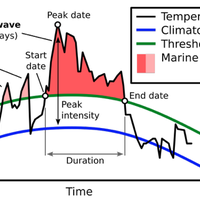 Marine heatwaves have recently been defined as “prolonged periods of unusually warm water at a particular location for that time of the year.” It’s important to note that marine heatwaves can occur at any time of the year, summer or winter, as their classification depended on the difference between the average temperature for a specific time of year and the observed temperature of the ocean.

Measuring the severity of marine heatwaves has become an important priority because these events are related to a range of biological, economic and political impacts. For example, in 2011, a marine heatwave occurred off western Australia resulting in the decimation of kelp forests that were ultimately replaced by low-growing seaweeds. This biological impact of the 2011 west Australian marine heatwave has remained long after ocean temperatures stabilised, suggesting that this extreme marine event may have induced permanent ecosystem changes.

This consistent classification scheme will allow for marine heatwave events to be easily compared and referred to; such as the Cyclone Debbie (2017) and Black Saturday bushfire (2009) events. This system will also allow us to better understand why some marine heatwave events have strong ecological effects, while others only have minor effects.

More information the work being done to better understand and predict marine heatwaves can be found at: www.marineheatwaves.org