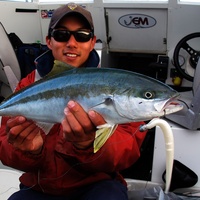 Jonah Yick catches his first yellowtail kingfish as far south as Hobart. Kingfish are the second-most reported species to Redmap that are out of their usual range in Tasmania.

KEEN FISHERMAN JONAH Yick finally landed a yellowtail kingfish this summer – and as far south as Betsey Island near Hobart.

‘This was pretty exciting for me as it was one of those fish I had always wanted to “tick off” in Tasmanian waters,’ Jonah said.  After spotting a few schools of 50 or so kingfish over the summer, Jonah began experimenting with different lures and snagged five fish.

Yellowtail kingfish (Seriola lalandi) is a common catch on the mainland but the species is, historically, a rare visitor to southern Tasmania. But it’s likely such hoodlums* will keep shifting their home polewards if Australian seas continue to warm, according to marine researcher Associate Professor Gretta Pecl from the Institute for Marine and Antarctic Studies. (*Kingfish tend to fight dirty at the end of the line, hence the nickname “hoodlum”).

FOR YEARS FISHERS have been telling Gretta anecdotes of catching prized (and tasty!) mainland fish like King George whiting, yellowtail and snapper on Tasmania’s east coast.  She predicts these catches will increase as fish migrate towards their preferred ocean climate.

‘Fish react to warming seas in different ways,’ Gretta said. ‘Some species are able to adapt to the new conditions. Some can’t thrive in warmer water and so the population may slowly die out.  Others move to keep pace with their preferred water temperature and conditions in order to survive.  And on the east coast of Australia, that usually means heading south.’

The Tasman Sea is about two degrees warmer than it was 60 years ago. Although that doesn’t sound like much, for marine life it’s like always leaving the heater on.  Even in the summer.  Each marine species prefers a unique range of water temperatures, salinity, depth and habitat.  Such factors (among others) determine where a fish lives and how it responds to ocean warming.  Studies suggest that between 20-85 per cent of the world’s species are already shifting their postcodes in response to rising temperatures.  Marine animals also have to cope with the physical stress of acidification (where more carbon dioxide dissolves in sea water, lowering the pH).  And of course, there are more parameters than just climate that fish have to deal with including habitat loss, fishing pressures and water pollution.

SNAPPER IS ANOTHER welcomed mainland visitor to Tasmania that may be searching for a more permanent sea change into southern waters.  Andrew Pender is an avid fisher and marine technical officer at the Institute for Marine and Antarctic Studies (IMAS). He said snapper (Pagrus auratus) have been documented in northern Tasmania and shallow, warm bays in the southeast ever since records began.

‘But the number of captures does seem to be increasing,’ Andrew said.  ‘Whether this is due to specifically targeting snapper, better reporting of captures, or if the snapper population is growing in Tassie waters remains unclear.’ 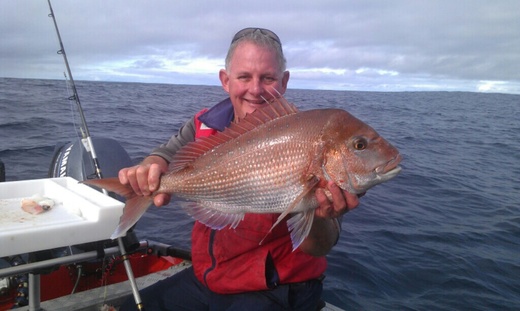 Above: Redmap member Brody Corbett was happy to catch this 'out-of-range' snapper south of Hobart in time for dinner (and he logged this sighting on the Redmap app!)

Many “mainland” fish hitch a ride south on the East Australian Current (EAC) to visit the Apple Isle each summer, and then retreat in the cooler months.  But this pattern is changing with the combination of warmer year-round temperatures and a strengthening EAC. (The EAC now reaches 350km further south along eastern Tasmania compared to the 1940s).  Andrew agreed the recent documented captures of snapper in the lower Derwent – for example a 7kg snapper caught in Blackmans Bay, south of Hobart – seemed rather unusual.  But more documented sightings are needed to determine if this fish is just a summertime visitor, or if it is settling more permanently in southern Tasmania.

IT WAS THIS lack of baseline data on fish distributions – visitor or new resident? – that led Associate Professor Gretta Pecl to set up the Redmap app and website.  Australians have shared more than 1270 sightings and photos on Redmap of marine life they considered uncommon in their local seas.  These sightings help scientists to track species that are migrating into new regions.  Given Australia has 60,000 kilometres of coastline, and the usual research funding constraints, scientists both need and welcome this citizen science data.

‘Thousands of fishers are on the water all the time and often see changes in Australia’s oceans before scientists do,’ Gretta said. ‘Redmap taps into the knowledge that fishers have reeled in after many years on the sea.  Their observations allow Redmap to better understand and predict changes in the distributions of marine life around the country.’

REDMAP IS ALSO interested in marine creatures that science knows little about. This includes the leatherback turtle, giant cuttlefish, and shortbill spearfish, to name a few.  Redmap member Will Verdouw recently logged a shortbill spearfish off the Tasman Peninsula in southern Tasmania.  The shortbill spearfish (Tetrapturus angustirostris) is a deep ocean fish and a rare sight anywhere around Australia.  Will caught one amongst a school of stripy tuna on typical tuna lures; and thought it was another tuna until a battle began.

‘The two guys I was with were teasing me because I was really struggling with it,’ Will said. ‘We didn't know it was a spearfish until we saw a long silver shadow.’

Over time, Redmap sightings will act as an early indication of those fish or regions that are most impacted by ocean warming and range shifts.  Traditional research can then be focused on those marine animals more likely to be shifting their homes south.  Knowing what fish is going where will help to prepare recreational and commercial fishers – as well as regulators – for changes in the species of fish that may be caught in the near-future.

Above: The elusive and magnificent shortbill spearfish caught off Pirates Bay on the Tasman Peninsula. Little is known about this species and all sightings on REDMAP are welcome! (Photo: Will Verdouw).

How you can help REDMAP
The Range Extension Database and Mapping project invites fishers and divers to log marine species not usually found in their local seas.  Download the Redmap app or visit www.redmap.org.au to share your photos of uncommon marine life.  Each sighting is verified by a marine scientist and displayed on the website.  Follow us on facebook.com/RedmapAustralia.  Redmap's national host is the Institute for Marine and Antarctic Studies (IMAS) at the University of Tasmania.