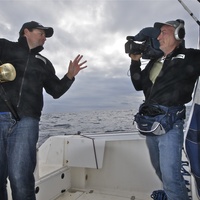 When fishing personality Andrew Hart answers the phone he’s in northern Tasmania. “I’m just sitting on the shore, bludging,” he says.  He’s in a small town called Wynyard, testing Yamaha outboard motors for his TV fishing show Hook, Line and Sinker.  The week before saw Andrew and co-host Nick Duigan filming an episode in Fiji.  And recently they were whisked away to the Kimberley. All to go bludging, ah, fishing… and to entertain around 300,000 viewers each week.

Hook, Line and Sinker’s varied locales and epic catches - and the hosts’ antics - have held audiences for more than a decade. The show’s website spruiks the duo as “seasoned television professionals who have retained their endearing appeal as down-to-earth ‘Aussie blokes’ who love to fish, and love to laugh”.

Andrew chuckles about their recent fishing tour of Fiji.  “We didn’t hit it at its best.” The big fish weren’t biting for the TV cameras. Fiji’s breathtaking snorkeling and diving more than made up for the meagre catch. And Andrew’s favourite place in Fiji? A nightclub in the capital Nadi. But that’s a different story.

Another memorable episode found the ‘boys’ on the Great Barrier Reef. “The fishing is pretty insane,” Andrew says. There’s a broad grin in his voice. “All the big ticket fish you see in the magazines are there and they are all available to catch: big giant trevally, Spanish mackerel, marlin and tuna.”

Andrew is aware his career path smudges the line between work and play.

“This is a fantastic job, one we don’t take for granted,” he says of 12 seasons of fishing for television. “On any nice day there’s nothing I’d rather be doing, no matter where in Australia."

But the two Tasmanian hosts had to take a gamble to hoist the show onto small screens around the country. Back in 2000 Andrew and Nick, both journalists at Launceston’s Southern Cross News, began mulling over ways to turn their favourite pastime into a TV series.

They took some holidays, and a news cameraman, and “without telling the TV station sort of borrowed their TV camera; and in those days they were really expensive gear.”

And so the first series of Hook, Line and Sinker (HLS) was patched together. The show was broadcast in Tasmania while Andrew and Nick still worked their day jobs; but by 2005 they had to decide between “being journalists and doing this fishing thing”. It was like choosing between a plate of homebrand fish fingers and a fresh Barramundi fillet barbecued with lemon butter. In 2006, HLS was launched onto regional channels across Australia.

Nick Duigan and Andrew Hart have hosted their fishing series for an incredible 12 seasons.

Andrew says HLS is not all about grandiose trips to exotic places. “We’d never stop just fishing in your local river, whether that’s Sydney Harbour or the Tamar River or the Derwent River because that way it’s achievable for everyone.”

Andrew is filmed casting hundreds of lines for six months of the year; but he’s always drawn back to his home state of Tasmania (where at age 10, his cousin introduced him to the fish of the Tamar and his future occupation). Recently, Andrew has noticed some changes in the fish he’s catching.

“In Tasmania you’d have to be a bit blind not to notice the changes, particularly from a recreational fishing side of things." He says yellowtail kingfish is a good example: they’re being caught in the River Derwent in Hobart. “And I’m pretty sure they weren’t there 10, 15, 20 years ago."

He’s also been pulling in more King George whiting, Mako sharks and mackerel over the years. He’s not sure if warmer waters are bringing down different species. Or whether more people and boats are out on the water with better gear to catch more fish.  “I think maybe it’s a bit of both,” he says.

But something sticks in Andrew’s mind from last summer: anglers were landing the tropical fish Mahi Mahi (dolphin fish) off St Helens on Tasmania’s east coast.

“I think that’s pretty unheard of,” he says. “I caught one in Fiji two weeks ago you know, in water that was 28 degrees and yet guys were regularly catching them off St Helens!”

Watch  Hook, Line and Sinker this season every Saturday on 7mate until July, and on Aurora Pay TV at various times each week.