Australians have shared more than 1900 sightings of marine life they considered uncommon at their local diving, fishing and swimming spots.

The most-reported Redmap species, both in and out of their usual home range, for each state are:*
Victoria:
1. Western blue groper (Achoerodus gouldii)
2. Whitebarred boxfish (Anoplocapros lenticularis)
3. White ear (Parma microlepis)
Western Australia (click on links to view the species):

Many of these sightings were spotted out of their historical distributions; while others were valuable observations of rare or poorly-studied species that we'll monitor over time.

* Reviewed by Redmap coordinator Dr Jemina Stuart-Smith up to 10 May 2016.

How are the sightings verified?

Each photo is sent to one of 80+ Redmap scientists around Australia who identify the species and confirm the sighting is in or out of its usual home range.

Each observation then becomes a data point that is mapped and displayed for all to enjoy at redmap.org.au. 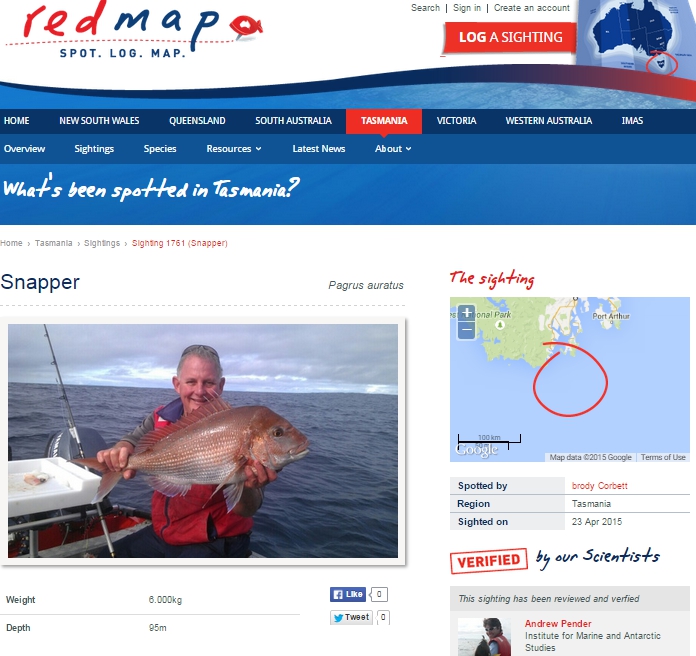 Photo above: An example of a sighting displayed and mapped on the Redmap website: this one is a snapper caught south of Hobart and well out of its usual range. Mapping is done with a 10km ’buffer’ so we don't give away your favorite fishing spots!

Over time the community photos of fish, turtles, rays, octopus, and more, will help scientists track if species are moving their usual distributions in response to changing seas and ocean warming.

As seas continue to warm around Australia more sea life are turning up further south than usual to follow their preferred sea temperatures.

Redmap needs more community observations to indicate which marine species are just visiting a new region seasonally (for example, via the East Australian Current in summer) or if they are shifting their distributions south more permanently.
Who reported these sightings?
It looks like scuba divers beat fishers for sharing the most sightings on Redmap: 58% of sightings were logged by divers and swimmers; versus 34% for fishers and boaters and 8% by beachcombers.  The most sightings came from Tasmania, New South Wales and Western Australia.
How does Redmap communicate to the public?
It's all explained in the infographic below! (click on image to expand).