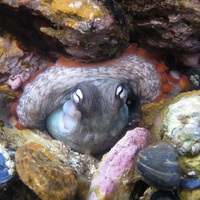 Research published in Current Biology shows a steady increase in the world cephalopod population — the class of molluscs comprising octopus, squid and cuttlefish — since the 1950s, at a time of increased fishing, growing pollution and ocean warming.

The data analysis, led by Dr Zoe Doubleday from Australia's Environment Institute at the University of Adelaide, has confounded previous expectations that cephalopod populations go through cyclical booms and busts.

We were surprised to see such a steady increase in the numbers over that entire period.
Dr Zoe Doubleday

"Anecdotal evidence had suggested the population may experience cyclical booms and busts over time, but there is instead a very consistent increase," she said.

Dr Doubleday and her colleagues were prompted to look at patterns in cephalopod population trends when searching for the cause of a dramatic drop in giant cuttlefish numbers in South Australian waters in 2013.

They collected information on changes in cephalopod numbers from fisheries and ocean monitoring bodies around the world and were able to create a timeline of the rates at which they have been caught, or counted in sampling, dating back to 1953.

"We were surprised to see such a steady increase in the numbers over that entire period," Dr Doubleday said.

The results show the increase is consistent across six different families and across 35 species living in very different parts of the ocean, from coastal shallows to open waters.