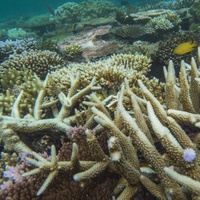 A dying coral in Moore Reef on the Great Barrier Reef. Pictures: Brian Cassey in The Courier Mail. Read the full story here.