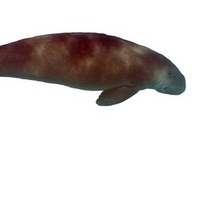 What started as a normal afternoon kitesurfing session off City Beach in Perth could have ended up being a very peculiar encounter for Redmap. On December 15 last year, ‘David’ our Redmap logger believes he zoomed past a dugong as it surfaced not far from shore at approximately 3 pm. Recognising that’s not something you see every day he doubled back to get a closer look and to make sure his eyes weren’t playing tricks on him.

Dr. Bob Prince from the Department of Parks and Wildlife says that dugongs may occasionally stray further south than Shark Bay where there is a large resident population.

“It’s certainly very unusual for people see a dugong in metropolitan Perth waters. However, the summer water temperatures off the south western WA coast are comfortable for dugongs, and the presence of seagrass species also grazed by the Shark Bay population can suit a stray dugong.”

“Given the recent warming trend in offshore water temperatures more dugong sightings might be expected in the future.  The cooler rough conditions setting in over winter have proven fatal to some of these strays on past evidence.” said Dr Prince.

Department of Parks and Wildlife records show that the confirmed  seasonal sightings reports have been more frequent around the Geraldton region, but others have come from as far south as the coastal town of Grey, 180 kms north of Perth.  A single deceased dugong washed up at Trigalow Beach near Bremer Bay on the State’s south coast in September 1987. This individual had apparently met an accidental death due to a propeller strike from a small commercial vessel, and most likely was carried to that stranding location on the Leeuwin Current.

“Over the years we’ve had several unconfirmed sightings of dugong around Perth so it would be exciting if anyone has photographic evidence of any other past sightings, or could provide those in future.” said Dr. Prince.

There was no opportunity for photos this time round so Redmap WA encourages everyone on the water to keep an eye out for any further sightings and have their cameras ready when out on the water.

“Dugong have a long and barrel shaped grey-brown body, paddle-shape flippers, a flattened tail and a distinctive head. Dugong do not have a dorsal fin and this is one way to distinguish them from dolphins which also have a flattened tail”, said Dr. Prince.

Timely reporting of out of normal range dugongs live or dead may help researchers follow up on cases. Sightings along the Western Australian coast can be reported direct to the Department of Parks and Wildlife (use the 24 Hour Wildcare Helpline on (08) 9474 9055 or email  Turtles@DPaW.wa.gov.au) and logged on Redmap either through the website or our new phone app.