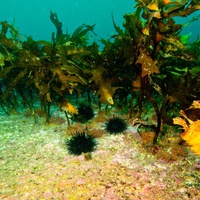 From healthy kelp beds to a barren: the impact of the sea urchin in Tasmania (Photo: Craig Sanderson)

Seaweed beds are essential to Tasmania’s marine coastal ecosystem, providing critical habitat for abalone, rock lobster, a raft of other invertebrates and many scalefish species. However, on the east coast they are under threat from overgrazing by the longspine sea urchin, Centrostephanus rodgersii, which changes reef systems into unproductive sea urchin ‘barrens’ largely devoid of seaweed.

Along the northeast Tasmanian coast, particularly around St Helens, widespread barrens habitat formed by the longspine sea urchin is now common and covers many hectares of reef. As these reef areas are underwater – and therefore out of sight to most people – it is difficult to fully appreciate the magnitude of the impact of the sea urchins. A similar impact on land would result in much greater public outcry and can be compared to the aftermath of a bush fire or forestry logging operations on vegetation stands.

Sea urchin barrens also occur further south on the east Tasmanian coast, particularly in deep water >12 m depth on exposed headlands. South of Freycinet Peninsula, the most common form of barrens habitat is the so-called ‘incipient barrens,’ in which the sea urchin creates localised grazed patches usually 1–40 m in diameter, among otherwise intact seaweed beds. Incipient barrens are the precursor of extensive barrens, and occur commonly as far south as the Lanterns at the mouth of Fortescue Bay.

There are records of longspine sea urchins being found as far south as Port Davey in Tasmania’s south west and at Pedra Banca, an isolated rock approximately 18 km off the southern end of Tasmania.

Part of the explanation for sea urchin barrens moving further south is ocean warming. Waters off the east coast of Tassie receive a double whammy: the underlying warming of the rest of the world’s ocean plus warming caused by an increased extension and persistence of the East Australian Current. Sea urchin larvae have a 12-degree temp threshold – they spawn in August and as water temps have been warming we hit that survival threshold progressively down the coast.

It is extremely difficult to recover seaweed habitat once widespread barrens have formed. It is thus urgent that management options to minimise risk of formation of incipient barrens, and of extensive barrens in areas where incipient barrens occur.

To this end, it is extremely useful for researchers to know where (1) Centrostephanus rodgersii occurs in seaweed beds, (2) where incipient barrens arise, and (3) where extensive barrens arise. However, given the broad geographic spread of the longspine sea urchin, it is impossible for researchers and managers to monitor the full extent of their spread.

So, here’s what you can do to help in Tasmania:

1) log onto Redmap and report any sea urchins south of Maria Island, Tasmania

All reports of the location of the sea urchins and their resultant barrens are very useful to the researchers engaged in identifying management responses to the threat of these urchins on Tasmania’s east coast (even if you think others might have already reported from an area).

More information regarding research into the longspine sea urchin: