The CSIRO has analysed sea temperatures along the Victorian coastline since the late 1800s and found eastern Victorian seas have warmed about 0.8°C since the 1960s compared to the long-term average. This region is part of the “Tasman Sea hotspot” for ocean warming, along with the east coast of Tasmania and southern NSW waters.

But coastal warming has been fairly weak in western Victoria, at less than 0.5°C in the last few decades.  Here, stronger upwelling along the Bonney Coast brings cool water to the surface and reduces the rate of warming.

In eastern Victoria, offshore water temperatures are influenced by the East Australia Current (EAC), which flows south. This current does not penetrate into Bass Strait, as the Bass Strait flow is generally from west to east. The seasonal cycle of the EAC along the east coast is visible as warm water pulses pushing south in the summer, and then a retraction of warm water to the north in winter.

On Victoria’s west coast, water temperatures are influenced by cooler coastal upwelling. This was especially visible in the summer of 2012 as colder water close to the coast.  This wind-driven upwelling typically occurs from December to March as a cold water plume along the coast. The Leeuwin Current flows from Western Australia along the edge of the continental shelf, and in strong years leads to warmer offshore waters in western Victoria in the winter.

Above left image: A relatively cool summer off the coast of Victoria (1994). Right: A relatively warm summer (2012). (Image: CSIRO)

While a 0.8°C rise in Victoria’s east coast waters doesn’t sound like much, it can have a real impact on Victoria’s marine ecosystems and fish distributions.  Marine species have their own set of conditions they prefer to live in, like temperature and pH.  Some biota will move (if they can) - also known as shifting their range - in search of these conditions if things get too hot at home.  Others may adapt well to warming seas; while some will not survive in the changing conditions.

For example, the Common Sydney Octopus (Octopus tetricus), usually found in NSW and southern Queensland seas, has been spotted in Victorian waters in recent years.

It’s no wonder some marine animals are being spotted further south of their usual range: possibly looking for cooler waters? 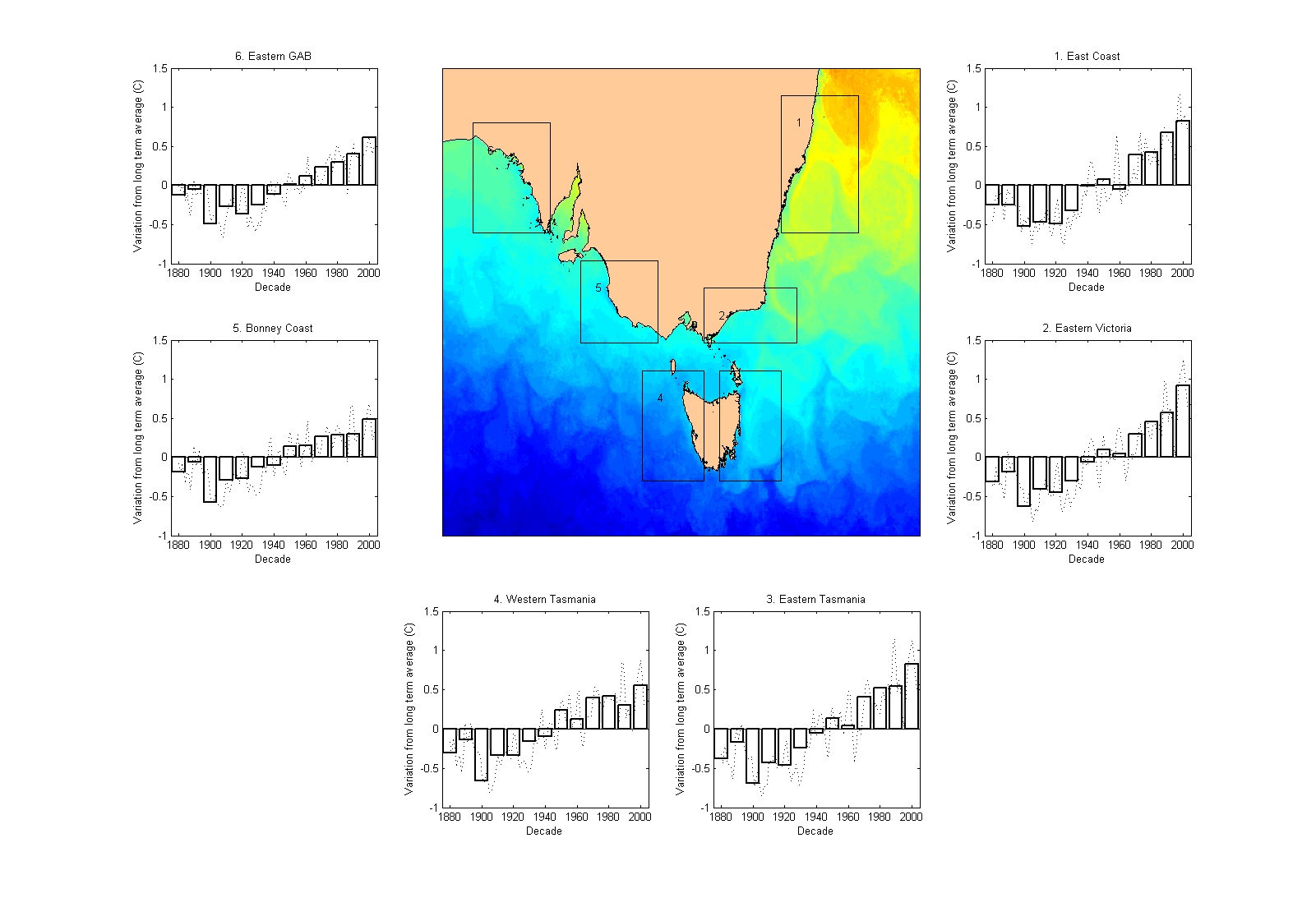 Above image: sea surface temperature in southern Australia from 1880 to 2000. Note that in general, water temperatures start to rise above the long-term average after about the 1960s. (Image: CSIRO)