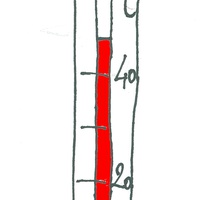 The CSIRO has analysed temperatures off the coast of Queensland since the late 1800s: QLD coastal waters have already warmed some 1°C over the past 100 years; and about 0.6°C since the 1960s.

Queensland’s sea temperatures are influenced by two major currents: the South Equatorial Current presently meets the coast just north of Townsville (~18°S) where it splits into the south-flowing East Australia Current and the north-flowing Hiri Current. These currents are likely to strengthen in the future with a changing climate, extending tropical waters into southeast Queensland.

Above: the system of currents along Australia’s eastern coastlines (CSIRO).

Already, the warmer oceans seen in 2012 along Australia’s east coast were caused mainly by the extension and increased strength of the East Australian Current (EAC), bringing warmer water from the north. In the future, it is expected that the East Australia Current will transport greater volumes of ocean water southward, modifying the tropical and subtropical extents of coastal environments and marine habitats.

Water temperature modelling has forecast this region may warm by approximately 2°C by 2063–2065 relative to the historical period (1870–2004).

A few degrees rise in water temperature over time doesn’t sound like much, but for marine ecosystems it has a significant impact on the distribution and physiology of marine species.  Marine species have their own set of conditions they prefer to live in, like temperature and pH.  Some biota will move (if they can) - also known as shifting their range - in search of these conditions if things get too hot at home.  Others may adapt well to warming seas; while some will not survive in the changing conditions.

A more tropical southern Queensland will lead to changes in biodiversity, population connectivity, ocean productivity and the distribution of pelagic species (those living in the open sea) in particular. For example, coral trout may head further south on the QLD coast in search of cooler waters; as well as less desirable species like venomous jellyfish and stingers.

In the future, the warmer waters of the Coral Sea may provide new recruits into the warming Great Barrier Reef ecosystem (given the prevailing ocean circulation).  But upwelling of cooler waters on the central Great Barrier Reef may help maintain some coral reef habitats within their present thermal tolerances. (It should be noted that ocean acidification - where more carbon dioxide is absorbed by the ocean, making it more acidic - will alter the chemical environment of all habitats).

It’s no wonder some marine animals are being spotted further south of their usual range along Australia’s eastern and western coastlines, possibly looking for cooler waters? Above: changes in Sea Surface Temperature (SST) since 1880 for northern Australia (CSIRO). Notice in the graphs, that water temperatures start rising above the long-term average after about the 1960s or 1970s.