Changes to the timing of life cycle events (phenology)

Phenology is a term used to describe the timing of life cycle events such as spawning or migrations. Often these cycles and events have evolved under very specific conditions and are triggered by changes in the natural environment, such as day length or seasonal temperature variations.

Ecosystems are very complex and there are many different interactions and links between species (such as predator/prey, competition for shelter and food). We need to develop a better understanding of how climate change is influencing the timing (phenology) of ecological events and changing the interactions between species. And how adaptive species and their broader ecosystems are to these changes.

For example, two studies have shown:

- The egg-laying dates of Little Penguins in Bass Strait are earlier in warmer years.

- The timing of peak rock lobster puerulus (juvenile) settlement has shifted to later in the year (from July to October).

Phenological changes are difficult to detect in marine species and little information exists in Australia.

All marine organisms live within an optimal range of parameters, such as temperature and pH, for which their physiology is adapted. Changes to such parameters can cause changes to vital physiological processes such as growth and reproduction. For example, the optimum growth temperature for southern rock lobster larvae (stage III phyllosoma – rock lobsters have 11 different life stages!) is around 20 °C. If the temperature of the water was to reach 21.5 °C they would be unable to adapt to this increase and would not survive.

However, some species may thrive under the new conditions and their physiological response may be to become more abundant or to grow faster. For example within the upper regions of the oceans all over the world are tiny plants and animals that cannot be seen with the naked eye. This sea soup - known as plankton - can be subdivided into zooplankton (animals) and phytoplankton (plants). These tiny creatures are very susceptible to climatic changes and the nutrient levels within the waters they live and are likely to become so abundant under certain conditions that they can be seen floating on the water as a toxic ‘bloom’.

For example 'red tides' of Noctiluca, a type of zooplankton, sometimes form a reddish bloom in waters around Australia’s coastlines where well-mixed warm waters and high nutrient levels may encourage their growth.  But increasingly, there are documented cases of these red tides in Tasmania in response to a combination of increased nutrient loads and warming waters off the east coast of Tasmania. The changes to Noctiluca and other zooplankton species are very important and the role of zooplankton in the environment is not to be underestimated.  Scientists are predicting that zooplankton will play a vital role in climate change science by acting as 'indicator species' for climate change impacts. That is, zooplankton may just be the oceans early warning system that changes are occurring. 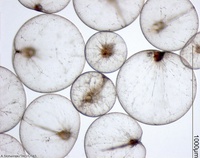 Noctiluca scintillans is a plankton that survives by ingesting ready-made organic matter in its environment rather than synthesizing its own energy as plants do (Image: Anita Slotwinski). 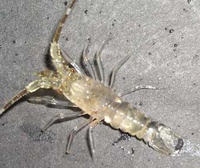 A five-centimetre juvenile southern rock lobster. Such puerulus larvae spend most of the time swimming in the ocean before settling onto rocky seafloor and turning into a young lobster. The peak timing of rock lobster larvae settlement may be shift