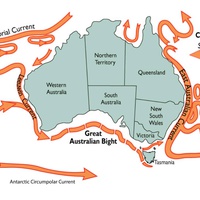 What affects the movement of water in the ocean? If you think of a current flowing in a river, the direction of the current is effectively downhill with gravity causing the water to flow along a path of least resistance into a lake or the ocean. Does the sea work like a river?

Spending a day by the sea you may notice some ocean currents at work, such as localised rips or larger-scale tidal movements. Currents in the ocean can be quite complicated and may be driven by wind, temperature differences, water densities or tides.

There are four major currents in Australian waters: the East Australian Current (EAC), the Leeuwin, the Antarctic Circumpolar Current and the Indonesian Throughflow.

The EAC moves southward from near Fraser Island in Queensland to the eastern shores of Tasmania. Remember the movie Finding Nemo? The EAC is the current that helped Marlin find his way to Sydney. The EAC is usually stronger in summer, when it reaches further south, often bringing with it northern tropical species such as tuna.

Beginning about mid-way down the Western Australian coast, the Leeuwin Current flows south-east across the Great Australian Bight and reaches the west coast of Tasmania as the Zeehan Current. This current is strongest in winter when it has been recorded travelling south, rounding the southern coast and travelling north again as far as Freycinet Peninsula (eastern Tasmania).

A third current system, the Global Conveyor Belt, originates in the southern ocean as the Antarctic Circumpolar Current. This is an ocean current created by density and temperature variations in the water, (thermohaline circulation). Thermohaline describes currents that are the result of differences in temperature (thermo) and salinity (haline). As the Antarctic water begins to freeze, very cold and salty water is left behind. The density of this water becomes quite high and it sinks below the surface (euphotic zone), deep into the ocean, and moves toward the equator. Eventually this water will warm, and as it does, it rises to the surface bringing with it nutrients from the deep.

Seas at the Millennium: An Environmental Evaluation, The Tasmanian Region CH 95, Ed C.Sheppard