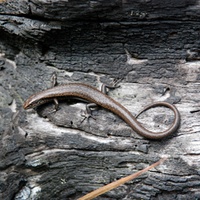 The thermal tolerance of 102 cold-blooded land animals, such as this Australian skink, and 67 marine animals, was compiled in a global dataset. (Photo: Jennifer Sunday).

All animals occupy a piece of real estate on this earth, known as their geographic distributional range.  Various factors probably contribute to determining a species’ range. But temperature is thought to play a central role, particularly in setting how far north and south an animal can live. Because of this, we expect that animals will move towards the poles as the climate warms. In fact, this is generally what we are seeing – animals the world over are moving towards the poles - however, not all animals are moving to the same extent.

In our work, we set out to test if animal ranges are set by their tolerance for warm and cold temperatures.  To do this, we gathered published data from a century of experiments on animals’ warm and cold functioning temperatures in cold-blooded animals such as marine snails, crustaceans, dragonflies, beetles, frogs, lizards and fishes.

We then got out our maps to find the Northern and Southern edges of each species’ range, and lined up the data for to compare where each species lived in relation to its temperature limits.

What we found was pretty surprising. We found a good match in the ocean: marine animals’ Northern and Southern limits closely matched the distribution we expect based on their temperature tolerance. However, we found quite a different pattern on land.  On land, there was a mismatch between where animals are found and where they can potentially live - most terrestrial species are not occupying the warmer ends of their potential real-estate.  In other words, something other than heat is keeping terrestrial animals from living closer to the equator.

Cold-blooded animals use up their potential real-estate different on land and in the sea. On land, animals tend to occupy only the cooler ends of their ranges, even know we predict they could live closer to the equator based on their heat tolerance.  In the ocean, animals tend to occupy their whole potential range. With climate warming, land animals are so far responding much more at their cold range boundaries, and responding much less at their warmer range boundaries.  By contrast, in the ocean, animals are responding equally at both range boundaries (Diagram: Jennifer Sunday).

Why are the warm boundaries of land species less sensitive to warming?

We think it’s a combination of three things. First, species ranges aren’t just set by temperature. On land where water is key, species may be hindered more by dryness, rather than being too hot at this range boundary. Second, it could that be rare heat waves are actually setting boundaries on where species can live. Finally, there are more species and much more ecological competition toward the tropics, which may be enough to exclude some species from living in the warmer end of their potential real estate.

One implication of this work is that we may have a better time predicting range shifts in the ocean comparted to those on land, because temperature plays a more general role.  Understanding of the factors that set species’ ranges, particularly on land, may help us to make better predictions for the future.