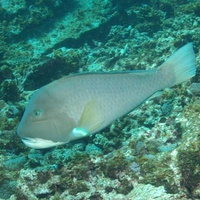 With the longest coastline in the nation, Western Australia is surrounded by the Indian Ocean and the Great Australian Bight. WA’s marine and coastal environments are host to unique habitats including corals, mangroves, rocky shores, sandy beaches, saltmarshes and seagrass meadows. A diverse range of marine life thrives here such as turtles, dolphins, manta rays, whale sharks, whales, dugongs, rock lobster, and abalone. The Leeuwin Current plays a large role in the West Australian marine ecosystem. It pushes warm, tropical, low nutrient waters down the west to the south coast of Australia.

There are particular regions which are at risk from a loss of biodiversity and/or decline in key species due to changes in the climate. Referred to as the rainforests of the sea (Knowlton 2001), coral reefs worldwide are sensitive to climate change and ocean acidification. These changes will make it more difficult for the reef to provide proper shelter and food for the many species which have come to rely on it. Corals may become vulnerable to more frequent bleaching events and coral disease leading to a loss of biodiversity and widespread changes in the composition of coral reef fish communities. It has been noted that coral bleaching has affected fish community structure at Scott Reef in WA.

Another reef at risk is the Ningaloo Reef. At 260 km long, it is one of the world’s most spectacular and biologically diverse coral reefs. Shallow lagoons and deep offshore waters create a diverse array of habitats for a multitude of colourful corals and more than 500 species of fish. Regular visitors to the Reef include whale sharks, turtles, dugongs, dolphins, humpback whales and recreational fishers and divers.

The Abrolhos is another unique ecosystem consisting of 122 islands, 60 km off the coast of Geraldton.  Its temperate waters receive warm tropical waters from the north via the Leeuwin Current. This low-nutrient water pushes tropical fish species and corals into The Abrolhos, where both tropical and temperate species live alongside each other. Corals and seaweeds provide shelter and food for the island’s marine creatures.

During the summer of 2010/11, the waters off WA experienced a marine heat wave. Temperatures in some regions rose to 3-4.5 degrees Celcius above the average seasonal temperature. The raised sea temperature caused coral bleaching and the death of a some fish species and abalone and lobsters, Panulirus cygnus.   This extreme weather event allowed some tropical pelagic species to head further south. One commercial fisher from Albany reported encountering tropical species along the temperate south coast such as manta rays Manta birostris, tiger sharks Galeocerdo cuvier, whitespotted wedgefish Rhynchobatus australiae, and Spanish mackerel Scomberomorus commerson .  The WA coast is expected to experience a ‘tropicalisation’ of the marine community in the future, with increasing dominance of warmer-water species.