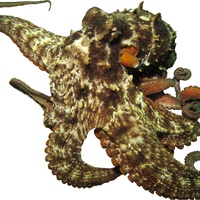 The Common Sydney Octopus, Octopus tetricus (aka the gloomy octopus) is an abundant species and important fishery in southern QLD and NSW. As waters have warmed it has been detected off Victoria and northeast Tasmania (Photo:R. Stuart-Smith)

The waters off New South Wales coastline range from cool-temperate to subtropical. Ecologically, NSW’s marine environment shares many similar fishery resources and habitats with the neighbouring states of Tasmania, South Australia and Victoria. On the north coast of NSW within the Solitary Islands region there is a rich and relatively undisturbed ecosystem of algae, corals, sponges and sea squirts. It’s the ideal habitat for the sea creatures that dwell on the sea floor, grey nurse sharks, marine turtles and fish which swim near the sea surface.

The East Australian Current (EAC) moves southward from the tropical waters of Queensland down along the east coast of Australia.  It is responsible for transporting tropical larvae to NSW coastal waters (Booth et al, 2007).  As a result of climate change, water temperatures of the south-west and south-east of Australia are warming faster than other regions. In the last 60 years the EAC has become stronger with warmer, saltier water now found 350 km further south (Ridgeway, 2007). It is predicted that the Tasman Sea is expected to experience the greatest level of warming in the Australian region. This may lead to a variety of cool-temperate species migrating southwards, becoming extinct or being replaced by the increased occurrence of sub-tropical and tropical species, including harmful species such as venomous jellyfish.

Marine waters in south-eastern Australia are responsible for 50% of Australia’s fisheries production, hosting a high level of endemic species, and offering no land mass further south for species that find themselves unable to cope with increasing water temperature or that are being displaced by species moving in from further north.

Species which form habitats are also at risk from the warming waters. The scleractinian corals or stony corals of the Solitary Islands region may become vulnerable to more frequent bleaching events and coral disease leading to a loss of biodiversity and widespread changes in the composition of coral reef fish communities. Kelp habitats (mostly Ecklonia radiata), which dominate the warm temperate coasts of NSW, may disappear from the northern reefs with associated reduction in the function of the rich and productive ecosystem. In South Australia and Tasmania kelp habitats are already moving southward, due to the increase in water temperature.  As temperatures warm, less food is available for sub-tropical seabirds leading to a decline in breeding success.

Cephalopods are invertebrates with a large head and tentacles such as octopus, squid or cuttlefish and are known to respond quickly to environmental changes. The Common Sydney Octopus Octopus tetricus (aka the gloomy octopus) is an abundant species and important fishery resource in eastern Australia. Until recently it was distributed from southern Queensland to NSW, but as waters have warmed, in the last few years it has been detected off Victoria and the northeast of Tasmania.  In NSW it is possible that recreational and commercial important tropical species, such as Coral Trout Plectropomus leopardus, could be become abundant enough to support small scale industries.