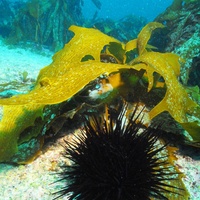 The long spined sea urchin (Centrostephanus rodgersii) has been moving south along Tasmania's east coast and taking over the habitat of the kelp Macrocystis pyrifera (Photo: Scott Ling).

Tasmania’s marine waters play host to a large variety of marine species suited to different ecological conditions. The warm tropical water of the East Australian Current heads down the eastern coast of Australia to Tasmania, meeting and mixing with the cooler, nutrient rich waters of the Southern Ocean. Tasmania’s west coast marine waters are influenced by the Leeuwin current which flows southward along the Western Australian coastline. This unique mixing of the marine waters with differing temperatures and nutrients, alongside the sheltered and exposed Tasmanian coastline, provides marine species with a variety of environments to inhabit and create a variety of unique ecosystems, some found nowhere else in the world.

Tasmania’s marine waters are warming at a rate much faster than the global average rate.  As the East Australian Current pushes the warmer water further south, species such as kelp are moving south towards cooler waters. Since the 1970’s there has been increase in numbers of the long-spined sea urchin (Centrostephanus rodgersii). Normally based in the temperate waters of the north, this long-spined urchin grazes the sea floor. When they amass into large groups, called barrens, their grazing destroys kelp forests. Giant Kelp forests are rich and productive ecosystems, so their eradication assisted by the long-spined urchin is leaving a diverse array of marine creatures without a home and food supply such as the black-lipped abalone and southern rock lobster.

The warmer Tasmanian waters are also encouraging some fish species usually seen north in subtropical and tropical waters to head further south. Pelagic fish species inhabit the upper layers of the open ocean. Both small and large pelagic fish are important in ecosystems as well as commercially and recreationally. Well known and wide-ranging larger pelagic species include tuna, billfish (swordfish and marlin) and sharks, and smaller species include sardines and anchovies. In 2010/11 the pelagic species which were reported this far south include skipjack tuna (Katsuwonus pelamis), yellowtail kingfish (Seriola lalandi), striped marlin (Tetrapturus audax) and black marlin (Makaira indica). It looks like they will be regular visitors and inhabitants in the future.

State of the Environment Tasmania – Coastal, Estuarine and Marine: http://soer.justice.tas.gov.au/2003/cem/7/index.php