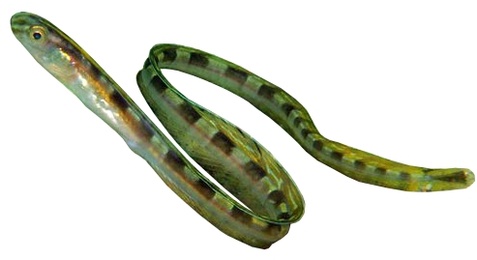 This fish has a long eel-like body. The dorsal fin runs the majority of the dorsal surface, beginning from above the eye and ending on the tail. The anal fin is also elongated but begins closer to the tail. Pelvic fins have adapted as two fin rays that are used for control when the species extends its head from burrows. The body is a light brownish-yellow colour with vertical dark brown bars. Some individuals have blue markings around the head and dorsal fin edges. Larger fish have a blue-ringed black spot on the dorsal fin above the gills. This species is easily distinguished from other blennies.

Burrows and tubes in sandy and muddy substrates; 2-150 m depth