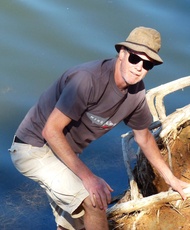 Beginning employment at the Australian Museum in 1981, Mark began permanent work in the Ichthyology Section in 1982. Initially working as a technical officer, Mark became the Collection Manager in 1987, a role he has held since that time. During his career, he organised and/or participant in over 30 collecting trips and expeditions within Australia and throughout the Pacific region. Mark's research work focused on the taxonomy of the Ghost Flatheads, Family Hoplichthyidae. He participated in numerous workshops, given many seminars and media presentations and has published written articles for both popular and scientific publications; more recently considerable effort has been directed to web-based publications.

Since October 2016, Mark has put considerable effort into Australasian Fishes (https://www.inaturalist.org/projects/australasian-fishes) , an iNaturalist project that allows any member to upload, identify and comment on observations of fishes from Australia and New Zealand The project has made many discoveries and is helping to document the fish fauna of the region. Mark retired in August 2018, but continue on at the Australian Museum as a Senior Fellow.