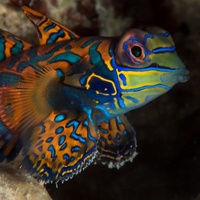 Although colour is extremely important in the animal world – it’s not something that we rely solely on when recognizing/identifying fish species – and that’s because it’s so variable and some fish are able to change colour instantly.

There are often vast differences in colour between juveniles, males, and females of the same species. This is even the case for some of the species listed on Redmap (see Fig 1; White-Ear (Parma microlepis), Coral pigfish (Bodianus axillaris).

In addition, rapid colour changes may occur during feeding, courtship, fleeing, or the fish is taken out of water. A number of fish also exhibit vastly different day vs night colouration!

Mimicry – copying the colour and or patterns and behaviour of another species. A number of fish (and other animals and plants!) use colour and pattern mimicry to avoid recognition -  for example mimicking a poisonous species to reduce the chances of being eaten.

It’s thought that around 60 marine coral reef fish use mimicry (Moland et al 2005). Mimics are most common in the families Blenniidae, Serranidae and Apogonidae and models (i.e. the fish they are mimicking) occur in the families Pomacentridae, Blenniidae and Labridae (Moland et al 2005). And as in humans, this occurs mostly in the juvenile stages... something anyone with siblings will have experienced at some point in their childhood!

There are 4 main types of mimicry:

One species – aptly named the Mimic surgeonfish (Acanthurus pyroferus) even takes it a step further (there’s always one!). Juveniles of this species mimic different pygmy angelfish – depending on where they occur (Centropyge flavissima, C. heraldi, C. vrolikii; see Fig 2).

So when you’re next trying to identify a species – make sure you first take note of things like body shape, fin shape and number, any obvious features (spines etc.)….and then colour!