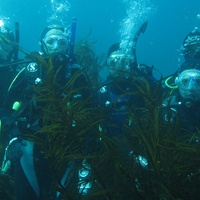 The list below provides an overview of the potential ways the Redmap data can be used.

Ultimately, we are interested in assessing if a change in species distribution has taken place, but this is actually quite difficult and can be complicated. However, we have developed a systematic, transparent, and repeatable 'decision tree' process that assesses the strength of evidence we have that a species may have changed its distribution (i.e. undergone a ‘range shift’). This method examines how certain we were of the historical range boundary (i.e. known distribution range) and then what evidence we have for out of range observations (i.e. identified by Redmap).

Individual sightings or groups of sightings may also be used to direct research by providing an early indication of possible species changes (i.e. provide an early warning system).

Redmap observations may identify areas or species that may be subject to change – highlighting the need for further examination by researchers, or possibly managers (e.g. toxic algae or venomous jellyfish etc.).

For example, Redmap data has been used to underpin/develop several new research projects, including:

Redmap sightings have led to research projects that have provided some important information about changing distributions of species. For example: first reports of Octopus tetricus in Tasmania by local divers led to investigations with commercial octopus fishers – who revealed they had been catching this ‘new’ species over the previous few years. We then initiated a student project which demonstrated via genetic analysis that this species had indeed undergone a recent and rapid shift in distribution. The species was also confirmed as reproducing at the range edge in the new range extension area.

Redmap provides a unique data source that is made available to everyone – fishers, divers, scientists and managers, as well as interested community members. After each observation is verified by a scientist it’s then displayed on the web for everyone to see. Sometimes this data is used by larger projects, adding important and unique data to the information they have from other sources.

Some single observations, or groups of observations reveal useful/interesting biological phenomena and are worthy of detailed examination and reporting in the literature. Some of these examples include:

Redmap Australia has two main objectives – ecological monitoring to inform changes in species distribution and to engage the marine community on issues of marine climate change (using their own data). Many of the papers listed here (and others in review/in prep) report on the success of that second aim, engagement with the broader marine community.

Reporting to the community on changes occurring in our marine ecosystems

To highlight potentially range-shifting species in specific areas we developed a ‘report card’. Currently this is available only for Tasmania, however we are in the process of applying for funds to make this report card automated and available for each state.

‘Other’ species reported via Redmap

Redmap has ‘listed species’ (see http://www.redmap.org.au/species/) where we explain what species to look out for in particular locations. However, many people spot ‘other’ plants and animals that they know or suspect are unusual for a given area, or may just be very rare or poorly understood.

Many of the sightings submitted to Redmap that are not designated as technically ‘out-of-range’ have been valuable for improving our knowledge of the distribution of poorly known or rare species, and Redmap has contributed species distribution data to the Australian Faunal Directory (www.environment.gov.au/biodiversity/abrs/online-resources/fauna/afd/taxa/PISCES).

A recent Honours Thesis “First sightings: Harbingers of species range shifts or false alarms?” examined a global dataset of out-of-range observations from the literature. This study found that first sightings were related to longer-term climatic processes (independent of sampling effort), and could therefore have potential use to indicate likely climate-driven range shifts. The development of an approach to detect impending range shifts at an early stage will allow resource managers and researchers to better manage opportunities resulting from range-shifting species before they potentially colonise.

Now that we have a global ‘proof of concept’ of this approach, we plan to adapt this analysis using Redmap data.

If anything is unclear or you'd like to talk to us about using the Redmap data or if you would like a PDF of any of the above papers, please contact us: enquiries@redmap.org.au