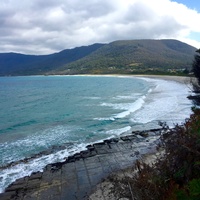 Tasmania's east coast is one of the ocean warming hotspots around the world (image:Yvette Barry)