When an elephant seal camped on a Perth beach for five days in February 2014, it attracted thousands of visitors, hundreds of Twitter followers and the title "Steven Sealberg" (decided by an online pole). The 2000kg seal, more at home on sub-Antarctic islands, was reported to Redmap here.

Redmap member Richard Curtis instantly knew the name of this huge, odd-looking fish when he found it washed up on a Hobart beach in December 2014. An ocean sunfish. "I looked them up years ago when I heard stories of Sydney to Hobart Yacht Race vessels suffering keel and rudder damage after hitting them!" he said.  Ocean sunfish are the world's heaviest bony fish; weighing in at about one tonne for adults. It is found in tropical and temperate waters but is a rare visitor to the Derwent River in Hobart.

It's a hairy sea slug! This nudibranch, Spirula brasiliana, was logged by the Sapphire Coast Marine Discovery Centre off the Eden coast in NSW. Warming waters are encouraging sea slugs to bloom around the world. See, for example: this article. Not so much an odd-looking fish... rather, check out the ingenious way the photographer used whatever was at (or, in?) hand to indicate the fish's size. Practical! FYI: the fish is a striped scat; not uncommon in NSW waters.

Beauty is in the eye of the beholder: this tassled leatherjacket looks like a morph between a leatherjacket and a weedy seadragon. Indeed, this species lives in weedy habitats, so it camouflages well in its environment. This sighting was logged by Redmap member and avid diver Loren Mariani on the Gold Coast, QLD.

What is it with Queensland and hairy fish? This striate anglerfish was photographed by diver Deb Aston on the Gold Coast. This species lives in various habitats from sponge gardens to sandy, muddy or rocky bottoms. The Fishes of Australia says: "Striate Anglerfish are ambush predators and feed mostly on other fishes. Their excellent camouflage allows them to hide amongst sponges where they lie almost motionless, only wriggling their worm-like fishing lure in front of the mouth. Unsuspecting fishes that approach to investigate the lure are rapidly engulfed."

Anglerfishes include some of the best camouflaged of all fishes. They have extraordinary adaptations including a lure for attracting their prey, a large mouth and "hidden gill openings". - See more at: http://australianmuseum.net.au/Striate-Anglerfish-Antennarius-striatus/#sthash.K7glQoAy.dpuf

This Basking Shark, also known as a 'hoe mother', was spotted in Westernport Bay in Victoria.  It's quite a special sighting as this plankton-eating shark is not often observed so far south. Basking shark are the world’s largest fish, after the whale shark, and usually found in warm-temperate waters. But it's also noted for it's dubious nickname:  'hoe mother'. It's not often you'd get away saying that one!

Kane Bowman spotted this rare sighting of a red handfish in the Derwent River, Hobart. The  handfish is a small animal at 8-13cm in length; and gets its name from flattened hand-like fins. According to the Fishes of Australia, this species is only known from the Port Arthur region to Marion Bay at depths of 2-20m.  It is also a species threatened by loss and degradation of habitat, pollution and introduced species.

In late 2013 and early 2014 Redmap received a series of rather peculiar reports in Western Australia. Beach goers along the south coast stumbled across not one but five enormous, yet stranded blue marlin. This one was found on Coodemurrup Beach, near Windy Harbour in south west of WA. Read about the unusual spate of strandings here. This is an unique sighting for its distinct markings and the fact it's more common to the Great Barrier Reef and northern NSW. It was caught in Sydney, NSW. 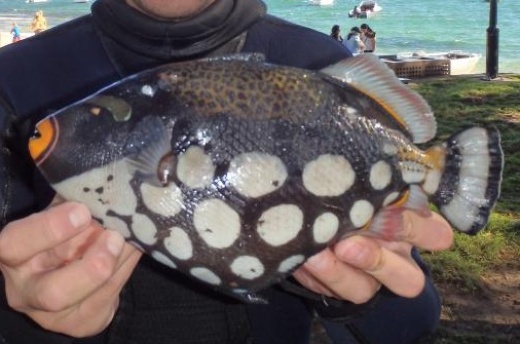