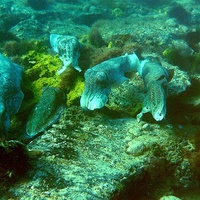 Point Lowly, in the northern Spencer Gulf, South Australia is the only known site in the world where the Australian Giant Cuttlefish (Sepia apama) form dense spawning aggregations during the months of May through to July each year. Although it is not completely understood why cuttlefish aggregate in northern Spencer Gulf, it is likely that they are attracted to the shallow rocky areas along the coast as it provides optimal habitat in which they lay their eggs.

Recent research has shown a significant decline in the Giant Cuttlefish populations at the Point Lowly aggregation site however scientists have been unable to conclude what is causing the changes to the population.

To address concerns about the declining population, the South Australian Government is working with the University of Adelaide, non-government organisations, local councils and the public to understand the cause of the decline and identify possible actions for recovery of the remaining population.

A new research project, funded by the Fisheries Research and Development Corporation and led by the University of Adelaide and South Australian Research and Development Institute (SARDI) Aquatic Sciences, will help to determine the movement patterns and population structure of the Australian Giant Cuttlefish in the Upper Spencer Gulf, as well as evaluate any environmental and human impacts that could be causing the species decline.

Little is known about its movement and migration patterns of Giant Cuttlefish, which makes it difficult to understand what is causing the changes to the population.

Through Redmap recreational and commercial fishers, SCUBA divers, boaters and scientists are being invited to spot, log and map sightings of Giant Australian Cuttlefish. Researchers are interested in sightings of aggregations of more than 10 adult cuttlefish as well as eggs, when spotted in South Australian waters, especially northern Spencer Gulf.

Log your sighting of Giant Australian Cuttlefish aggregations or cuttlefish eggs via www.redmap.org.au

Remember, there is currently a ban on the take of cuttlefish in the waters of northern Spencer Gulf.

Kate Rodda is the regional administrator of Redmap SA and works for Primary Industries and Regions SA (PIRSA, Fisheries and Aquaculture) - contact her at sa@redmap.org.au