Since December 2009 Tasmanian fishers and divers have been collecting data for Redmap. To commemorate this milestone, we have generated a Report Card  summarising all the uncommon fish and marine observations collected by “Redmappers”. This is an exciting time for Redmap: we are celebrating three years of support from you, and have now launched the project nationally. Redmap is generating a database of sightings to detect which species are shifting their range around Australia as oceans experience changes like warming.

Three years is not a long time in the context of detecting a species range shift, but we couldn’t wait to delve into the data. In particular, we wanted to see if there were any clues indicating which species were potentially on the move off the east coast of Tasmania, relative to their range boundaries in 2009. A grant from the Tasmania Climate Change Office allowed us to form a working group of 21 scientists, natural resource and data managers and science communicators.  As a team we developed an assessment method that provided an early indication of potential range shifting species by classifying overall confidence (for a potential range shift) as ‘high’, ‘medium’ or ‘low’. Once a draft of the report card was ready, we received excellent feedback from fishers and divers on how to make it more interesting and easy to follow. 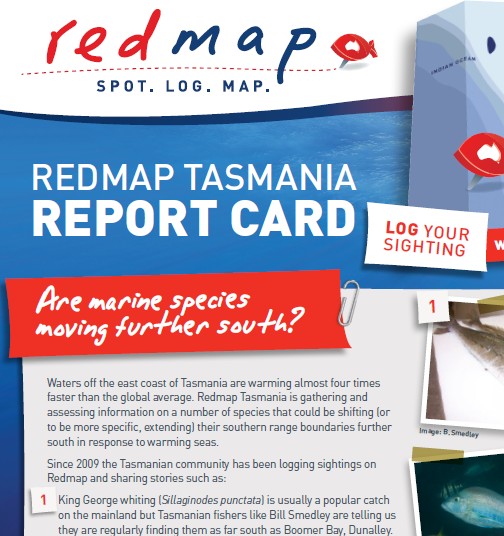 The results from the assessment revealed 26 species had more than one ‘out of range’ verified sighting (either through a photo or scientific collection/review). Among those species there was high overall confidence that the gloomy octopus was potentially shifting further south in Bass Strait. This could be good news for the octopus fishery, but may be unwelcome among commercial and recreational rock lobster fishers who currently catch them given this octopus predates on southern and eastern rock lobster. Crimson banded wrasse and rock cale also showed high confidence of potentially moving south in Bass Strait. Likewise, there was high overall confidence in halfbanded sea perch shifting south of St Helens and rainbow cale shifting south of Maria Island – an attractive species in a spot favoured by many divers!

Species favoured by our Redmap recreational fishers such as yellowtail kingfish showed medium confidence in a potential shift south of Maria Island; while tailor and King George whiting showed low confidence (in potential shifts) south of St Helens. The medium overall confidence in yellowtail kingfish was driven not through a lack of consistent ‘out of range’ observations, but more so by the lack of confidence in its historical range as of 2009. The low overall confidence in tailor and King George whiting movements was due to limited consistent sightings – which could possibly be due to an absence in these species south of St Helens, but it could also be due to a lack of ‘out of range’ logged sightings with photos included. So we appeal to all fishers and divers to please log your sightings with photos as these observations are precious in our evaluations!

There are more results and stories from our supporters available in the Redmap Tasmania report card. We are also enthused by the prospect of further developing the assessment method used here for a nationwide assessment and report card in the next few years. King George whiting caught out of range and cooked up for dinner by Tasmanian fisher Bill Smedley (photo taken by B. Smedley)