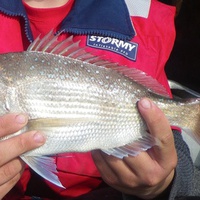 Left: This snapper was caught by Redmap member Daniel in northern Tasmania. Snapper used to be an uncommon catch but now is now a regular in the north of the state and even has a bag limit! (Photo: Daniel Paull).

Redmap Australia invites people to share sightings of marine life not usually found at their local fishing, diving and swimming spots.  Now all Australians can help track fish and other critters that are ‘moving house’ - or shifting their range - in response to recent changes in marine ecosystems like warming seas.

Considering 3-4 million Aussies go fishing or diving at least once a year, Redmap can tap into the observations of thousands of ‘citizen scientists’ who spend hours on the water.

But it all began in Tasmania with reports of some wayward snapper.

Marine biologist Dr Gretta Pecl first germinated the Redmap idea in 2008 after hearing that Tasmanian fishermen had been catching snapper for years.  This seems uneventful, except snapper (Pagrus auratus) wasn’t then considered a common fish to hook in Tasmanian waters!

Dr Pecl, from the Institute for Marine and Antarctic Studies (IMAS) in Hobart, planned to investigate if this fish was really migrating further south into cooler waters.  Except she couldn’t snag funding for the project.  The fishermen’s sightings were considered ‘anecdotal’ and not sufficient evidence of snapper occurring in reasonable numbers in Tasmania. (Over the past few years, snapper has become much more common in Tasmanian waters – and even has a bag limit).

“In hindsight, the lack of funding was fortuitous,” said Dr Pecl. “It sparked me to create a simple way for people to report sightings of uncommon fish along their stretch of coastline, and set up a system where their photos could be turned into verified data points.”

And so www.redmap.org.au was born in late 2009 (a.k.a the Range Extension Database and Mapping Project) with funding from the Tasmanian Community Fund (TCF) and support from the marine community.

Tasmanian fishers and divers have logged hundreds of sightings on Redmap of more than 70 species. This includes yellowtail kingfish (Seriola lalandi), white-ear (Parma microlepis) and zebra fish (Girella zebra), many spotted further south than their usual home turf.  There have also been sightings in Tasmanian seas of the gloomy octopus (Octopus tetricus) and eastern rock lobster (Jasus verreauxi), species traditionally found off the coast of NSW.

The Redmap website has been popular with over 2,600 visits and 10,000 page downloads each month of the latest fish photos, marine information and news. And over 900 subscribers from around the world receive Redmap’s quarterly newsletter.

With such a positive response it’s no wonder Redmap was catapulted onto the national stage, with support from states around the country.

Redmap Australia, www.redmap.org.au, is keen on sightings and photos of marine life deemed uncommon along any stretch of Australia's coast. And not just fish but also turtles, sharks, rays, crayfish, corals, seaweeds, algae, urchins and prawns. Photos are verified by a team of marine scientists to identify the species and to confirm they’re away from their usual home turf. This ensures higher quality data than those first sightings of snapper back in 2008!

Redmap aims to become a continental-scale monitoring program along Australia’s vast coastline to help track marine range shifts; but also to engage Australians with marine issues using their own data.

“We hope to create a network of fishers and divers that are driven to finding out how fish are impacted by changing conditions, like ocean warming, by contributing to this knowledge,” said Dr Pecl.

Redmap supports the Australian Government’s Inspiring Australia stategy, which aims to boost science literacy and teach the value of science in caring for our environment (Inspiring Australia is one of Redmap’s major sponsors).  For marine ecosystems, this encourages the healthy use of our seas so we can all continue to enjoy the marine environment and marine recreational activities. Redmap allows the community to both participate in, and learn from, collecting information about their marine environment.

Each sighting is a piece of the puzzle that over time will reveal to the community, scientists and industry which species or regions may be experiencing greater changes in species distribution. And the sooner the community help gather this information, the better, as seas along some regions of Australia’s coastline are warming 3 to 4 times the global average. Turning up the heat tends to stress marine ecosystems and species, and can impact fish growth, reproduction and behaviour.

Associate Professor Natalie Moltschaniwskyj is a marine ecologist in the School of Environmental & Life Sciences at the University of Newcastle and is the coordinator of Redmap NSW.

“We’re predicting a mixed reaction to warming seas,” Moltschaniwskyj said. “While some species may adapt to the balmy new conditions, others will shift into new areas in search of their preferred marine climate or may dissappear from an area.”

Already anecdotal evidence from fishers and divers have pointed to some range shifts. Assoc Prof Moltschaniwskyj said they’re hearing about more tropical fish venturing into Sydney Harbour like damsel fish and angelfish species. Her team will track some 60 species through the Redmap project including butterfly fish, painted crayfish and tropical wrasses.

“Gathering many sightings over time will show if these fish are here to stay, one-off visitors or just seasonal migrants,” she said.

Redmap’s community observations will be an early indication of species and regions that are experiencing the most range shifts, so that management and research can be better channelled into these areas.

To adopt a cliché, it’s science for the people by the people.

“Redmap is the ultimate in crowd sourcing,” said Dr Gretta Pecl about her brainchild. “It will tap into the knowledge - and eyes - of thousands of fishers, divers and swimmers to track changes in fish distributions around the country.”