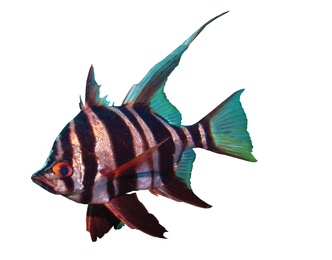 The body is light and silvery with 6 to 8 vertical black bands of varying length and width. The old wife has poisonous sharp spines in its dorsal fins.Old Wife is considered quite common in Bass Strait and can be found in reef habitat along the north and north-east coasts.

Found in shallow coastal reefs, from southern Queensland to Victoria and west to South Australia all the way to Western Australia. Known to be common in the Bass Strait and quite common in northern Tasmania. Considered rare in the southern Tasmania.The body is light and silvery with 6 to 8 vertical black bands of varying length and width. Quite similar in appearance to boarfishes but has two separate dorsal fines as an adult. The old wife is relatively small at 25cm and 800 grams but can pack a punch with poisonous spines in the dorsal fin.And its name, not very complementary and the reason behind it worse. When the old wife is stressed it makes a grating sound. Mmm who ever named this fish was not married I bet.

In Tasmania, log an old wife if you spot it south of Maria Island, on the east coast