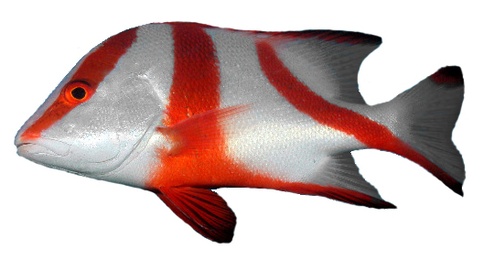 A fish easily identified in the juvenile and young adult stages by the striking markings on its body. Three dark red bands cross the body vertically. One runs from the front of the dorsal fin, through the eye and ends at the mouth. The second runs from the middle of the dorsal fin, crosses just behind the pectoral fin and ends on the pelvic fin (the pelvic fin is the same colour as the band). The third band originates at the rear of the dorsal fin and crosses diagonally to the lower corner of the tail. A small area on the upper tail is also marked with a band, or a spot in some individuals. In large adults the bands connect to become one, making the fish a bright red colour.