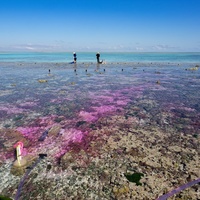 Scientists often test their ideas in laboratories because the real world is a complex and challenging place to accurately identify relationships between cause and effect. Results from lab studies are then used to guide our understanding of nature’s inner workings. However, this understanding is usually only the outline of a more complex picture that is revealed when ideas are taken out of the lab and tested in the real world. Two landmark experiments aiming to understand the effects of ocean acidification on coral reef communities have done just that, and their findings provide our best understanding of how the burning of fossil fuels has, and will continue to, impact coral reef communities.

Both experiments took place on One Tree Island, a southern section of the Great Barrier Reef. The first manipulated the chemistry of seawater over an entire reef community by adding sodium hydroxide (an alkali). This caused the pH of the seawater flowing over the reef to reflect pre-industrial levels when human-caused ocean acidification had yet to occur. By doing so, the researchers essentially took the reef “back in time” and became the first group of scientists to experimentally manipulate seawater chemistry in a natural coral reef environment.

Their findings showed that the reef community’s ability to construct its calcified architecture was improved under the simulated pre-industrial conditions. Specifically, reversing conditions improved the rate of total reef calcification, which is the accumulation of new calcium carbonate that allows reefs to grow and to recover from damage, like that caused by storms.

Study author Kennedy Wolfe described the findings as “a clear indication that ocean acidification since pre-industrial times, about 100 years ago, has already taken a significant toll on entire coral reef communities. These are changes that have occurred in our lifetimes.”

This first study, published in the journal Nature, has recently been followed up with a complementary study by the same team. This time the researchers effectively took the reef into the future by adding carbon dioxide to the seawater flowing over the same coral reef community to simulate levels of ocean acidification expected by 2050.

The latest study, also published in Nature, found that there was a 34% decrease in total reef calcification when exposed to expected future conditions. This is a much greater effect than that observed in previous studies, which report declines in calcification around 15–20%. The vast majority of previous studies have been undertaken in a lab on individual coral species, which fail to capture the response of the entire system as in the ambitious field experiments described here.

Taken together, these experiments are crucial to understanding the full scope and complexity of the impacts of ocean acidification on reef communities, and is a land-mark example of science breaking free from the confines of a laboratory to better understand the serious threats challenging the biodiversity we recognise today.