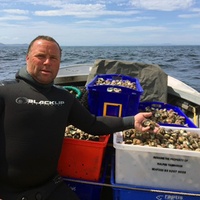 WHEN Bryan Denny was 13-years-old he rode to school each morning and eyed the abalone divers boating out to sea from his hometown of Dover, a small port in southern Tasmania.  Bryan knew even then: diving for abalone is something I’d like to do.  He didn’t mean when he grew up; he meant right now.

“I used to throw my bike up on the bank and wag school to go fishing for the day with the ab divers,” Bryan says.

He would spend many a school day on the ab boats learning everything he could about fishing and the shellfish trade. Living in a remote coastal town meant Bryan’s teachers soon caught wind of what he was up to. They seemed to accept “that’s just Bryan”. His mother was less enthused. She often worried to him, “you’ll never learn anything, Bryan”.

Such concerns faded when Bryan started diving at age 14 and received his first commercial fishing licence a year later. Over the years he gathered a wealth of knowledge from local fishers and divers and even studied the profession at the Australian Maritime College.

Nearly three decades on and Bryan is making a good living in the fishing and diving industries. His commercial focus is now on periwinkles, sea urchins and abalone. He is also the Vice President of the Tasmanian Commercial Divers' Association.

A WITNESS TO CHANGES

Over the years Bryan has kept a keen eye on the health and condition of Tasmania’s sea life.  He says some marine populations have remained relatively unmarked by time; while others have undergone noticeable changes, both good and bad.

Casting his thoughts back to the waters he knows best, near Dover, Bryan remembers fishing as a kid with his dad for blue-throat wrasse. He believes their numbers haven’t changed much since then. In fact, he says other fish like sea sweep now appear more abundant than ever.

Some marine life seems to be in decline since his younger years. Bryan highlights the kelp forests in southern Tasmania: “Kelp forests have downgraded in their size.” Not disappearing, he says, but struggling nevertheless.

Bryan has also seen some fish venturing into regions they were rarely found in the past. He logged two sightings of herring cale (Olisthops cyanomelas) on the Redmap website.  Bryan caught the herring cale off the south-west coast, which is out of their known geographical distribution.

Bryan attributes the waxing and waning of Tasmania’s marine life to two main influences: fisheries management and, to a lesser extent, a changing climate.

He’s a keen supporter of the management plans introduced for fisheries like abalone and periwinkles. Bryan says the size and catch limits are the only way to protect these fisheries now and into the future.

“My eldest boy has just turned 18 and I’ve leased a commercial dive licence for him,” Bryan says. “I’ve been taking him to [my usual fishing] places over the last couple of years… I’m trying to instil in him: ‘you look after it: look after the resource and it will look after you’.”

Bryan makes it clear that the concepts of climate change and ocean warming are not keeping him up at night. But he has noticed the seasons and water temperatures shifting in recent years: “It gets that bit warmer earlier in the summer and it’s staying warmer that little bit longer.”

His tentative observations are correct.  Studies show average sea surface temperatures on Australia’s east coast increased 2.28 degrees over the past 100 years.  And a degree of that increase occurred in the last few decades.  Tasmania is considered a global ‘hotspot’ where east coast waters are warming almost four times the global average.

A few degrees in water temperature, give or take, doesn't sound like much. But it impacts fish and marine life: sea temperature is an important factor in how far north or south an animal can live. Bryan agrees marine life will be affected if temperatures continue to rise into the future.

Bryan offers this prediction of how ocean warming could impact abalone populations: “It will slow down their growth rates, so that – and this could be 50 years down the track – you might find that abalone may not be growing to the size limits that are set now.”

Good fisheries management and warmer waters have silver linings:  periwinkles populations are growing well and turning up in places Bryan has never seen them before. This includes areas near Recherche Bay and outer Bruny Island.

“The periwinkles seem to be thriving more with that little bit of warmer water,” he says, “They might become a predominant target species rather than a high-volume low value species.”

BEST CAREER IN THE WORLD...

Bryan is positive about the future of Tasmania’s shellfish industry.  After nearly 30 years Bryan has no regrets skipping so much school in his youth and starting his fishing career early.

“It’s a different office to work in every day: even though you might go to the same place time after time after time, it’s always different,” Bryan says. “You’re out in the open air and not cramped into a box.” 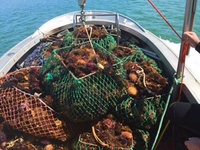 Bryan now makes a good living from the sea but he also respects it: "you look after it: look after the resource and it will look after you.” 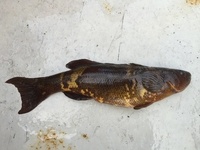 Bryan caught two herring cale (Olisthops cyanomelas) off Tasmania's south-west coast, out of their usual range, and logged them on www.redmap.org.au

The 'usual' or known distribution of herring cale in Tasmania. Bryan spotted two individuals well out of this historical distribution. This doesn't mean the species is necessarily migrating from its usual range: over time more Redmap sightings will build a better picture of whether such species are on the move in response to warming seas.