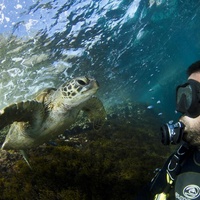 “The aim of the ‘Marine Exchanges’ survey is to find out what the public thinks about helping scientists, how they want to get involved, and how scientists can better communicate with them,” said Vicki Martin, lead researcher and PhD candidate in the School of Environment, Science and Engineering at Southern Cross University

“The results of the national survey will help scientists understand how to tap into the invaluable observations of those who frequent coastal regions.”

More than 85 per cent of us live within 50 kilometres of the ocean, meaning the majority of Australians use the marine environment in some way. Marine users include fishers, divers, surfers, beachwalkers and boaties; anyone that loves getting into or on the water.

“Anecdotally, we know that fishers and other marine users are reporting an increase in the shark activity off the east coast. With the southern states experiencing warmer currents that usual, people have been sighting what would normally be called northern species more regularly. For example, fishermen in Tasmania are now catching snapper, yellowtail kingfish and striped marlin. If these observations were able to be harnessed and collected in a way that patterns can be established, it would increase everyone’s understanding about marine species and changes going on in the water.”

Digital technology was already being used across the country to connect individuals with scientists.

A current successful example of citizen science in action is the Redmap project (www.redmap.org.au) which has seen Australians send images to scientists of species that are uncommon for any particular location.

“Technological advances in the past decade now enable accurate and robust data to be collected from marine users in real time using portable devices such as smart phones,” said Vicki.

“While a small number of studies have focused on people who are already involved in citizen science projects, so far there has been no research into the general population of marine users to work out how much interest there is from the public.

“The results of the ‘Marine Exchange’s survey will help scientists create research projects which are more interesting and engaging for the public.

“The survey team wants to hear your thoughts about public involvement in marine science regardless of whether you think it’s a good idea or not.”

Any Australian citizen or resident over the age of 15 years can participate in the survey.

The survey and further information can be found at www.marineexchanges.wordpress.com or on Facebook at www.facebook.com/MarineExChanges