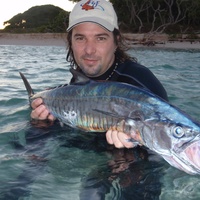 Diver with a speared Spanish mackerel. This species can be captured as far south as Sydney on the east coast and Perth on the west coast in warm years (Photo: Dave Welch)

Many Australian tropical fish are truly iconic in the eyes of anglers. Barramundi, Spanish mackerel, coral trout and mangrove jack are just a few of the hugely popular species targeted along Australia’s northern coastlines. However, we have been getting anecdotal reports of tropical species in unusual locations. One notable example is the reported catch of a coral trout off the east coast of Tasmania! This is likely to be attributed to the East Australian Current (EAC), which in the past 50 years has gradually increased its southern penetration making east coast waters warmer than usual (Ridgway and Hill 2009). This is just one effect of a changing climate. We actually know very little about climate change impacts on the key fishery species that so many people rely on for social benefits, business profitability and for eating pleasure.

The impacts of climate change on Australia’s tropical fisheries is being investigated by a three-year research project through the FRDC called ‘Management implications of climate change impacts on fisheries resources’.  The collaborative study includes scientists, fishers and managers from around Australia, including Queensland, the Northern Territory, Tasmania, NSW and Western Australia. Scientists on the project are drawing on previous research, and looking at existing tropical fisheries data collections in new ways to assess how sensitive these species are to changes in the environment. Climate change is already influencing the Australian environment and these changes are predicted to continue and even accelerate. This project aims to understand how these changes affect important fish species, and predict the potential impacts on fisheries in the future. Ultimately, the results of the research will be used to assist stakeholders best prepare for the potential changes in fisheries ahead.

Project leader Mr David Welch said the main aim of the project was to ensure fisheries stakeholders had the best available information so they can prepare for the potential climate-related changes to fisheries populations and their fishing activities. This is particularly important in tropical Australia where iconic species such as barramundi and coral trout attract thousands of visitors each year to try their hand at catching one of these tasty fish. Climate variability has always had an effect on fisheries, but only recently has it been documented that productivity of some species is linked to environmental factors such as rainfall patterns, and for others the timing of spawning is linked to water temperature. That means that if these environmental variables change in the future as predicted, there may be some dramatic changes on species. Some of these changes may be positive, but others will be negative.

Two of the ways that species may be affected are by changes in their productivity or changes in their distribution. For example, a gradual shift in fish distribution may impact fishers in one region, but open up opportunities for fishers in another region. The movement of Spanish mackerel south from northern waters, due to increases in water temperature, is a good potential example of distributional change. If fish productivity becomes more variable under climate change, then reliability in catches will be affected from year to year. Barramundi recruitment has been shown to be positively correlated with high river flow patterns so reduced rainfall, as predicted in some regions, may mean fewer barramundi willing to jump on an angler’s hook.

The project started in 2011 and has so far produced reviews of 23 tropical fisheries species which in itself will be a useful resource for all stakeholders. The project team have also been conducting analyses of data sets to better understand species relationships with the environment. This information will underpin assessments of key fisheries in better understanding potential impacts. But the project is not just about boffins sitting in front of computers. In September and October 2013 the project will conduct a series of regional stakeholder workshops to present findings of the project and for scientists, fisheries managers and fishers to work together to ensure that a range of practical and relevant adaptation options are considered for management and industry.

The project is a led by James Cook University in collaboration with the Queensland Department of Agriculture, Fisheries & Forestry, the Northern Territory Department of Resources, the Institute for Marine & Antarctic Studies at the University of Tasmania, Infofish Australia, Maynard Marine, C2O (Coasts, Climate, Oceans), and the Queensland Seafood Industry Association. The project is supported by funding from the Australian Government Fisheries Research and Development Corporation and the Department of Climate Change and Energy Efficiency. Results of the project are expected to be available in early 2014.

This is an FRDC project: ‘Management implications of climate change impacts on fisheries resources of northern Australia’. Project number: 2010/565 FRDC-DCCEE.