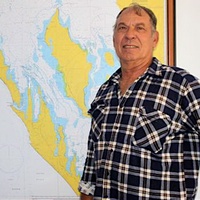 Dennis Hoult has been fishing in WA for well over half a century. He tells us a story or two about the changes he's seen in that time (Photo: Department of Fisheries WA).

Dennis Hoult was just five years old when he started his fishing career in Shark Bay, Western Australia. It was the early 1950s and his granddad, a commercial fisherman, took Dennis netting for six months before school interrupted his early calling.  It’s one of Dennis Hoult’s fondest memories. He also recalls how, for helping all those months on the boat, his grandad gifted him a toy truck with a 5-pound note in it (which must’ve been a fair wad of cash back then because Dennis remembers this highlight vividly).

Dennis Hoult comes from a long line of fishermen in Shark Bay. His dad was one of region’s last pearlers and his brother is a commercial fisherman in Western Australia too.

Dennis could tell us a story or two after nearly half a century of netting fish like whiting, mullet and tailor for a living.  Over the years Dennis has seen subtle changes in his local seas; many welcome and others less so.

When he started commercial fishing he used to pull up net-fulls of small herring that he sold as crayfish bait. The herring’s name escapes him but he does recall there used to be 4-tonne schools of them without having to search very hard. “But I haven’t seen them around now for 30 years,” Dennis says.

He also mulls over the memory of mangrove red snapper (also known as Mangrove Jack, or if you want to get technical, Lutjanus argentimaculatus).  Where 20 years past he’d spot many in Shark Bay, now he glimpses just the odd one.

But most of Dennis’s recollections are about new fish species coming down into the Shark Bay region.  “We’d never heard of mud crab when I was growing up!” he says. But now he’s seeing many more mud crabs; and people are catching them for sport.

Over the last decade there’s also been more threadfin salmon (also known as King threadfin, Polydactylus macrochir), a species more at home in the warmer climes of Karratha and Broome.  Dennis is seeing schools of juvenile threadfin salmon that may be drifting down the coast.

And to his delight, another welcome visitor is frequenting the area more.  “I’ve never seen so many Southern Right Whales as in the last three to four years and this year, 2012, the most ever,” says Dennis, who’s seen pods of up to 25 whales in the western gulf of Shark Bay.

On the other side of the country, recreational diver Mary Malloy has also noted new arrivals into Victorian waters during her more than 2000 dives over 30+ years.

But it was only when she hit the fish ID books that she realised she was oogling many uncommon species at her favourite dive spots of Queenscliff, Barwon Heads and Wilsons Promontory in southern Victoria.

“I see a lot more white-ear now. I used to never see them,” she says. “I used to consider them just a New South Wales species.”

Mary is also photographing more western blue groper (Achoerodus gouldii), albeit small ones, which she’d never seen a decade ago. And in recent years there appears to be larger schools of 50 to 100 yellowtail kingfish (Seriola lalandi).  Prior to that she’d see just five or six at a time.

As well as an avid photographer, Mary considers herself a Redmap groupie. “I’m such a Redmap fan – I’m out there seeing new species. I’m always on the hunt for something new.”

Another Redmap member is Phil Malkin, who's also been identifying unusual species at his local fishing and diving spots in Bicheno, on Tasmania’s east coast.

“During the summer you often see the odd thing that’s uncommon like blue morwong. This is one that we rarely saw 20 years ago and now we see a healthy population every summer,” says Phil, a dive instructor and avid fisherman.

But over the decades it’s what’s not there that stands out for Phil. “You don’t see so many fish anymore,” he says. “It’s getting harder to get fish – I’ve almost given up on crayfish,” he says.

Phil says 20 years ago there used to more lobsters, trumpeter, kelp forests, parrot fish, wrasse and sea horses in the Bicheno area. “I remember going on a night dive through all the boats moored at the ramp and there were sea horses on the anchor chains from top to bottom. Now I only see two or three in the same area,” he says.

Phil questions if the water has become a bit murkier over the last three decades, and somewhat warmer; or maybe the East Australian Current is stronger. But he also wonders if the region is somewhat too popular with tourists and fishers.

Back in Western Australia, veteran fisherman Dennis Hoult is not sure why he’s seen new arrivals into Shark Bay over the past 50 years. He says it could be due to warmer seas, stronger currents or tighter fishing regulations, which may allow stocks to replenish and other species to move in.

What he’s pretty certain about is this: he’s soon to retire after most of his life on the water. But he knows he can’t keep away from the sea.

“I’ve never caught a fish with a rod before, so I might give that a go one day.”