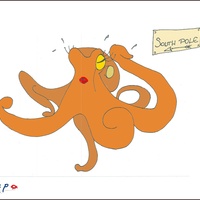 By Yvette Barry and Laura Purcell

Fish aren’t so different to the average Australian. Like many of us, they need stability in order to thrive. A constant environment in which to work, eat, breed and live. Each marine species prefers a habitat with specific water temperature, pH, salinity, substrate and food, which defines their distribution.

But recent changes have been recorded in the marine environment such as increases in water temperature, and more acidic seawater (as more carbon dioxide is absorbed by the oceans).  These changes are like cranking up the heater during a Queensland summer.  It can stress marine species to their physical limit and impact their growth, reproduction, feeding, and behaviour.

Marine biota will respond to these changes in three main ways. Some may adapt to the new conditions and stay (although their health and numbers may be affected).  Others will move away in search of their preferred conditions.  Then there are those that just don’t cope and die out.

But all these reactions have a flow-on effect for marine ecosystems and fisheries.

Already a variety species appear to be migrating southwards along Australia’s east coast, while others are becoming extinct or being replaced by subtropical and tropical species. It may sound lovely to see more butterfly fish and tropical wrasses in New South Wales; but warm water also brings with it less welcome species like venomous jellyfish.

Kelp habitats are already on the move south in South Australia, Tasmania and New South Wales as sea temperatures rise.  This means less habitat and food for fish and seabirds in those regions that rely on the rich diversity of kelp forests.

The Common Sydney Octopus (Octopus tetricus), an important commercial fishery, may reduce in numbers in southern Queensland and NSW as these species may be migrating into Victorian and northeast Tasmanian waters.

And coral bleaching, due to warming, has been noted in Queensland, Northern Territory and Western Australia and has affected their associated fish communities.

The above are just a few examples, but it’s not all gloom and doom. New arrivals also mean new opportunities. In NSW species such as coral trout (Plectropomus leopardus) could become abundant enough to support a small fishery. And King George whiting (Sillaginodes punctatus) is a welcome new arrival for recreational fishers along Tasmania’s eastern coast.

Read how fish and marine species in your region are reacting to changing marine conditions: