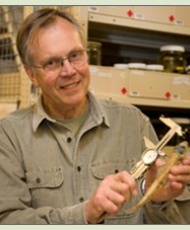 Dr Martin Gomon is regarded as Victoria’s authority on the identification and distribution of fishes. His research interests focus on the diversity and evolution of fishes in southern Australia and throughout the world. He was born and educated in the USA, arriving in Australia in 1979 to take up the newly created position of Curator of Fishes at the then National Museum of Victoria. He immediately set about reorganising the museum’s historically significant fish collection and building it to where it today ranks as the third largest in Australia.

He has actively collaborated with colleagues throughout Australia and internationally on a wide variety of studies, from taxonomic revisions to environmental modelling, using fish distributions to act as surrogates for habitats. Although scientific in the main, his publications also range into the realms of semi-popular and utilitarian.

Dr Gomon has promoted the efforts of the ichthyological scientific community in Australia at a time of dwindling numbers and declining resources, with members continuing to punch above their weight. The OzFishNet consortium, comprising Australia’s fish taxonomists, for which Dr Gomon was an organising and founding member, continues to attract funding for projects like its soon to be launched Fishes of Australian Online website.