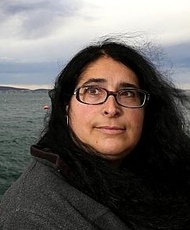 Lisa-Ann Gershwin is a biologist based in Tasmania, who has described over 200 species of jellyfish, and developed a system to predict blooms of the hazardous Irukandji jellyfish in north Queensland. She led a team that discovered that the blooms coincide with the blooming of salps, and that these were prompted by upwelling after the dying down of trade winds. She has described several poisonous jellyfish. In 2013, Gershwin published a book describing the diversity and adaptability of jellyfish, and their increasing numbers at the expense of other organisms worldwide, through overfishing, pollution and modification of the marine environment. She concedes there is little that can be done to reverse or even halt the process of the marine environment becoming dominated by jellyfish worldwide.