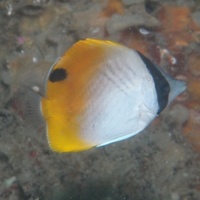 A 5 cm juvenile threadfin butterfly (Chaetodon auriga) spotted on the Central Coast of NSW by Redmap member Tom Davis. This tropical butterfly fish is usually seen on the coral reefs of the Great Barrier Reef.

Fish are cold-blooded animals (also known as “poikilotherms”!) that are very reliant on the surrounding water temperatures to survive.  Water temperature has a powerful effect on the metabolic rates of fish, their growth rates, and when they reproduce.  This close association with water temperatures means that the different fish communities along Australia’s vast coastlines each have their own specific range of water temperatures in which they can best survive, grow, and eventually reproduce.

Many marine species release their eggs and sperm into the water column where fertilisation and early development occurs, called broadcast spawning.  For most species spawning occurs during spring and early summer, when the young who are developing in the open water can take advantage of plankton blooms.  The larvae that develop from these fertilised eggs are very different in appearance to the adults, with reduced fins and muscle mass, so they have limited swimming ability.

The Eastern Australian Current (EAC) brings tropical waters southwards along the Queensland and NSW coastline.  Increased strength of this current has resulted in unusual patterns of water movement on the southeast coast of Australia and now warm water is found much further south than in the past.  So the EAC is the vehicle that can move larval marine animals from tropical environments south into temperate areas.

The tropical fish larvae that arrive on NSW reefs increase in size and undergo changes in colour, fin size, and muscle mass, eventually becoming brightly coloured juveniles.  These juveniles, who often look like miniature adults, are able to take up an adult existence in reef and seagrass environments.  The juveniles grow and will survive over the summer and autumn months in NSW, with growth rates depending on the water temperatures and available food.  Divers will often spot brightly coloured, tropical juveniles along the NSW coast when temperatures are optimal, i.e. warmer than usual for these warmer-water species to thrive and survive.

Is this a Range Extension?

Normally as the water temperatures cool over winter these juvenile tropical vagrant species find that it is too cold and will not survive to become adults.  Therefore, the presence of juvenile tropical species in summer does not indicate that these species are undergoing a range extension.

But if adults of these tropical species are found during the winter months in NSW waters this suggests that it is warm enough for individuals to survive and take up permanent residents in their new southerly home.  Therefore, logged sightings of the adults of tropical species in the winter months are evidence that these species are starting to undergo a range extension.

Where are the Adults?

Redmap NSW have included in our “species of interest” list some of the 47 tropical vagrants identified by Dr Figueira and his colleagues – but only those species we think may start to survive over winter and grow up to be adults on the NSW coast.  We need photos of tropical species spotted during the winter months on NSW reefs and estuaries.

If you need an excuse to go diving and fishing over the winter, then Redmap can provide it.