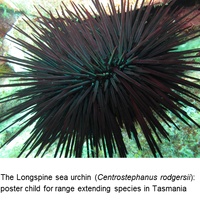 Most species, in the ocean and on land, have particular preferences for what kind of environment they like to live in. For an ocean dweller environmental preferences can include habitat, depth, oxygen, salinity and/or wave exposure, to name a few. One environmental factor that is important to all animals is temperature because it has a strong effect on how the body functions. This is especially true in the ocean where most organisms have little capacity to modify their body temperatures from their surroundings.  The location where these environmental preferences intersect (i.e., where preferred depths, temperatures, salinities etc. meet) in conjunction with where other species live generally defines a species’ range. As our climate changes, many species’ are moving with their preferred environmental conditions- resulting in changes in their range.

In measuring how species ranges have responded to climate warming, the first challenge is to estimate the geographic limits (or boundaries) of where species live. While this task may seem simple, it is riddled with challenges. Many marine species can travel large distances and may prefer living in different environments during different times of the year and/or at different stages in their life cycle (i.e. they are migratory). Consequently there are several ways to define their range based on: different stages in their development (e.g. juvenile and adults phases); different seasons (e.g. summer and winter) and; when they are breeding versus when they are not breeding.

So what is a range shift? Range shifts can be defined as a change in the distribution of species boundaries from previously known boundaries for any or all of the developmental stages, events and/or seasons. Range shift can involve a reduction in the area that a species lives i.e. the ‘new range’ is smaller than the ‘old range’, which is often referred to as a range contraction (Figure 1). For example, both the northern and southern range boundaries of Notoacmea mayi, a little limpet species that lives on the rocky shores of Tasmania, have shifted south and north respectively since this 1950’s resulting in range contraction (see Pitt et al., 2010 for more details). Another type of range shift is a range expansion, where the area that a species lives in increases i.e. the ‘new range’ is bigger than the ‘old range’ (Fig. 1B). For example, the southern range boundary of Eupetrichthys angustipes, a Redmap species commonly called snakeskin wrasse, has shifted south since the 1800’s resulting in range expansion (Last et al., 2011). 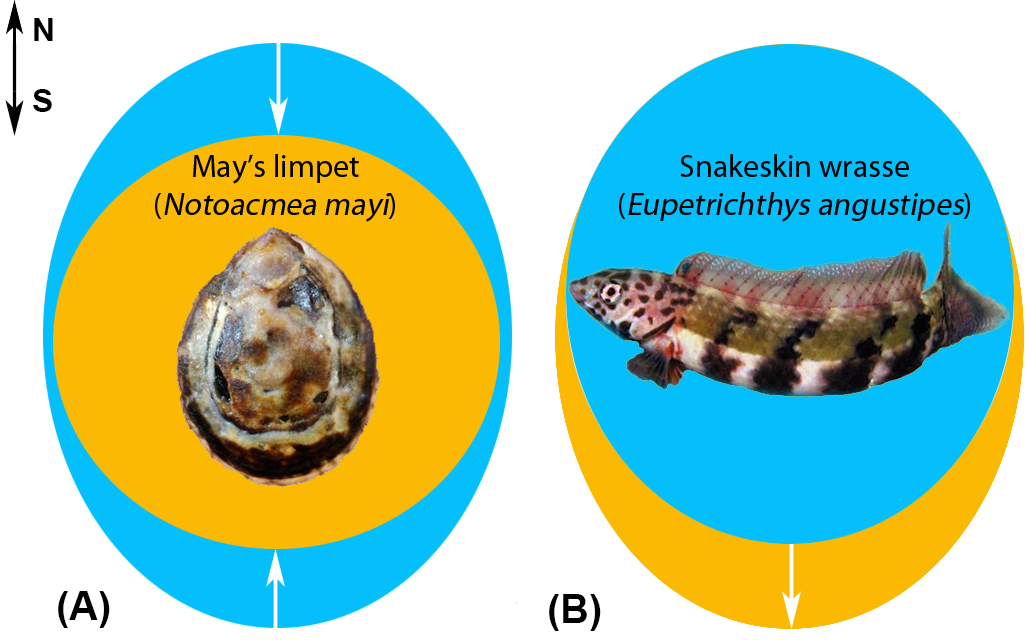 Figure 1 What’s a range shift? These diagrams are schematic representations of species range shift from their old range (blue) to their new range (orange) that involves: (A) range contraction from both the north and south, e.g. May’s limpet (Notoacmea mayi) and; (B) a range expansion in the south only, e.g. Snakeskin wrasse (Eupetrichthys angustipes).

Information on the geographic location of many marine species, particularly for all of their developmental stages, is limited. Ideally we would like to know where species range boundaries have existed during different stages in their development in the past and how these are changing in response to a changing climate. However, because of the challenges and costs that come with collecting data from the marine environment, most of the available information is on non-breeding adult ranges, if it is available at all. In the ocean this kind of data is often collected by commercial fisheries, museums or citizen science projects such as Redmap. Given that information on the ranges of many marine species is limited, projects like Redmap have great potential to contribute to our understanding of species ranges and how these could be shifting with a changing climate.